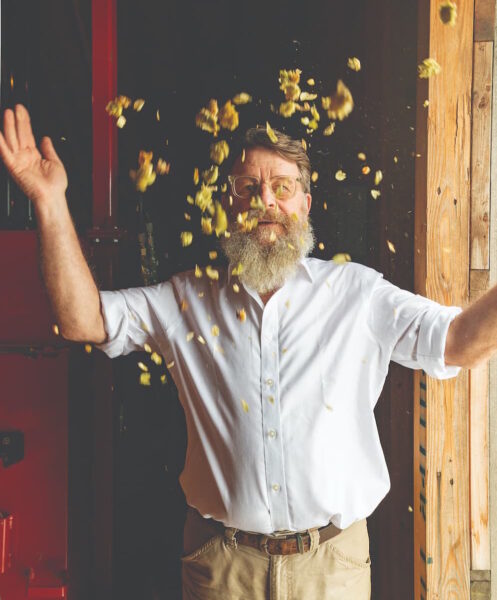 When James and Shrevie Shepherd were living in Africa and India, little did they dream that one day they would find themselves running the largest hops farm in Connecticut. In 2014, after more than a decade overseas where James worked as an epidemiologist with the C.D.C. and Shrevie for the U.S. State Department, the couple bought an old dairy farm on Sharon Mountain and renamed it Smokedown Farm (after a farm in Oxfordshire where James’s mother and uncle had been evacuated during WWII). Neither of them had ever farmed before, but as James puts it, “every Englishman is a farmer at heart.”

So they made a go of it. James, a Briton who sports a magnificent beard, continues to work three days a week as a consultant for the W.H.O. and as an infectious disease specialist at Yale. The rest of his time is devoted to the growing of hops, which are integral ingredients in the brewing of beer. There are dozens of different hops varieties, each one offering a unique flavoring characteristic.

The Shepherds’ timing was propitious. The domestic craft beer craze was taking off and Smokedown began supplying their sustainably-grown hops to many Connecticut breweries, including Firefly Hollow in Bristol, Black Hog in Oxford, Two Roads in Stratford, and Kent Falls in Kent. “We are really lucky to live and brew our beers in an area with growers as passionate, talented, and neighborly as the folks at Smokedown,” says Kent Falls’ Barry Labendz.

“It’s been a steep learning curve,” says James. “But we are getting better every year.” In 2018 they hired Nebraska-native Ally Mills to manage the farm. The farm not only grows and harvests hops but also dries and turns the hops into the pellets that they sell to the breweries. The 667 18-ft. poles that James erected by hand form the trellis architecture of the lush and fragrant nine-acre hops-yard, and he hopes to expand on to more of their 175 acres. By mid-August when the hops are ready the Shepherds bring in the harvest. “Our sons, friends, local helpers, everyone comes,” says James. “It’s hard work but so rewarding.”