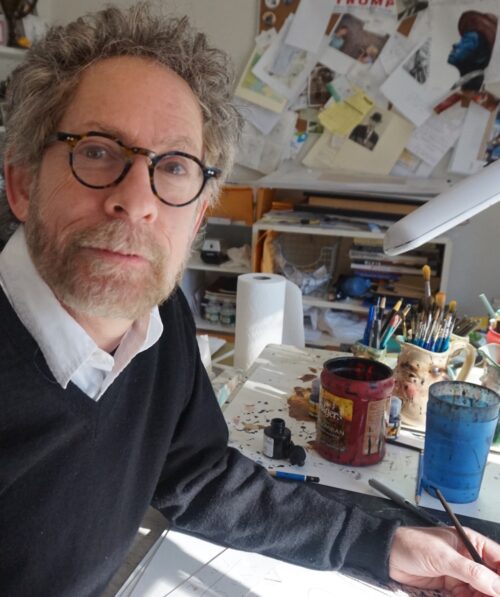 Illustrator Barry Blitt claims that he is just trying to make himself laugh. But he makes everyone else laugh as well. He is perhaps best known for his covers for The New Yorker. His knack for rendering current political issues with the darkest of humor has won him accolades from critics and fans—and a lot of hate mail from dissenters. And recently that talent won him a Pulitzer Prize for editorial cartooning.

“It was completely out of the blue and unexpected,” says Blitt. “I got a call from the magazine’s editor on a Saturday night, which would be strange under any circumstance. He said I had won a Pulitzer but I couldn’t tell anyone yet.

“It was so amazing and I tried not to get too obsessed about it. That worked for a short time, but now I am back to beating myself up every day. Resting on this kind of laurel is probably dangerous for me.”

But Blitt obsesses a lot.

“I have a peculiar compulsion to redraw something over and over until I feel I’ve got it right,” he explains. “But really the first attempt—well, sometimes the second—is generally the best. A drawing loses life after that. When I saw my first cover in print I was sort of like I often am: ‘Oh why didn’t I do this?’ or ‘Why did I make that that color?’ That’s pretty par for the course with me,” Blitt confesses.

Even now after all these years and a Pulitzer Prize? “Absolutely. I did a cover a few weeks ago of Trump and several of his people in an operating room. I tried to be realistic with the colors and the medical garb they were wearing. When it came out I convinced myself the colors I used were all wrong.” And speaking of Trump. “I have been told no more Trump covers but I can’t help myself. I’m not yet tired of him as a subject to draw.”

Blitt was born in Montreal and studied at Ontario College of Art and Design and first started drawing political cartoons for Toronto Magazine. Assignments from magazines like Rolling Stone followed, as well as a ten-year stint drawing celebrity cartoons for Entertainment Weekly.

Although Blitt lived in New York City for a time, he now resides in Roxbury in a house once owned by Arthur Miller and Marilyn Monroe.

“I can’t see my neighbors and the tranquility allows me to sleep, which I need to do in order to work. If I’ve slept well, and that’s not always a given, then by two or three in the afternoon I’m bitterly disappointed with everything I’ve tried. If I get the go-ahead to do a drawing I have to force myself to finish it. Often if I have more than a day, I just keep doing more versions. Usually the first is the best and the freshest. The art editor knows that and tries not to give me so much time. Sometimes it works to my advantage to have something look as if it was scribbled out, even though it may have taken me five or six hours or days.”

Blitt is now doing the Kvetch Book for The New Yorker website.

“That’s been a nice thing to do. You never get to do what you want, but I’ve done some Keith Richards and Bob Dylan—I get to stray away from the political stuff.”

But not for long. There are surely a few more Trumps in Blitt’s future.