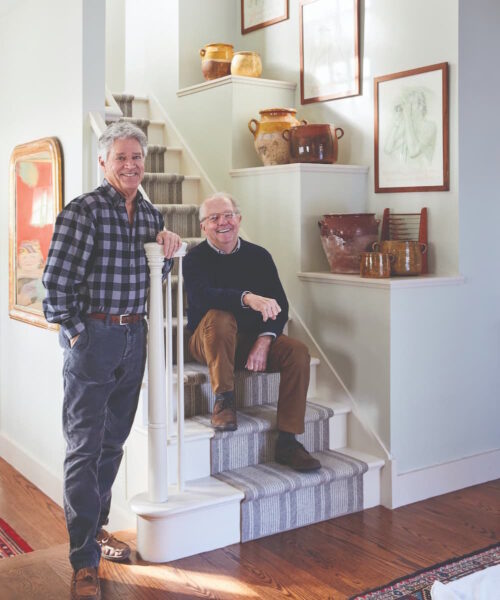 If One is Good, Many is Better

A House Resplendent with Treasures

There are collectors and then there are Tim Donoghue and Tom Fitzsimmons who give new meaning to the word. Their farmhouse in Roxbury is chock-a-block with every imaginable assemblage of objects, from books to teapots to white pottery to lighting fixtures to vintage detective magazines. Walking through the various rooms has the effect of being in a very eclectic emporium.

“We don’t start out to begin a collection,” says Fitzsimmons. “We’ll see something and say ‘Oh, isn’t that nice, let’s buy it.’ And it grows from there.” Both men are retired actors, Donoghue on stage in New York and Fitzsimmons in television in Los Angeles.

“I moved to California in the ‘80s,” says Donoghue. “We bought a house there and then bought a house in France. We went for one year to renovate it and wound up staying for 13 years. When we decided to move east this was an area that we loved. We knew the minute we saw this house that it fulfilled our vision. We have owned six houses in Connecticut, but this is the final one—we are not moving again.”

“The land was so beautiful,” says Fitzsimmons, “and it was on a dirt road so there was no noise. I had always dreamed of living in an 18th century house and here it was.”

The house, built in 1830, had been neglected for many years but the couple knew that there was great potential, so they took it on—with the help of Timothy J. Egan Builders, of New Preston.

“Tim had done a lot of work on our other houses, so we jumped at the prospect of working with him again,” says Donoghue. “He was the one who found our architect Scot Samuelson, who turned it into our dream house.”

Samuelson respected the house’s history and added a wing, which includes a main floor master bedroom, that seamlessly integrates with the original structure. Although the ceilings are low, and the overall square footage is about 2600, the addition of windows and the moving of some doorways evoke a feeling of spaciousness.

“While many of us like the charm of historic houses, most would opt for tall ceilings over low and an abundance of large windows,” says Samuelson. Unfortunately the ceilings could not be raised but many larger windows were added to bring spaciousness to the smaller rooms.

Speaking of smaller rooms, Donoghue’s studio wins the prize. Tucked away on the second floor, it is where he can be found exploring any number of creative paths.

“I love old lighting and I am always finding new pieces and repurposing them. I also do collages. I sometimes make my own paper, or I buy handmade sheets from Mexico or France, dye them with fabric dyes. I rip it up and put it all back together in different forms,” says Donoghue. In addition to his workspace, there are shelves of supplies, paintings leaning against walls, and tons of light.

The men are hard put to choose their favorite collections, but each has his specialty.

“I tend to buy more artwork than Tim does,” says Fitzsimmons. But we generally share the same tastes and are always buying things for each other.”

Even though there are masses of shelves and rows of pottery, teapots, books, records, it is all laid out in a way that does not feel claustrophobic, but instead invites a guest to stop anywhere and enjoy a tableau of treasures. Next on the list of projects is to bring back the gardens to their original glory.