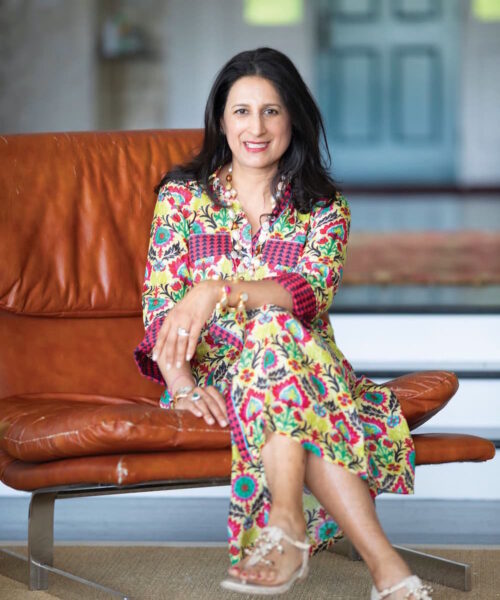 When Rati Bahadur Madan is not ensconced in her lovely Washington home with her irrepressible golden retriever by her side, she is traveling the world for Yatra, the women’s fashion label she co-founded.

A little over a decade ago, Rati launched Yatra with her best friend Gayatri Khosla. The two women had dreamed about joining forces and creating their own clothing line back when they were in boarding school in India, where they were born and raised. Coincidentally, after college they both ended up working in the United States: Rati in finance and Gayatri, who lives in Virginia, in human resources. Years passed before the idea of starting their own label line resurfaced when they each took a break from their careers to raise a family. Soon after, they launched Yatra, which in Hindu means “journey.”

The culturally-inspired collection, which can be found in boutiques, online, and at trunk shows, features handcrafted clothing, jewelry, and scarves that promote artisans from India. Three times a year, the two women travel to small workshops in Mumbai, Jaipur and Delhi, where they collaborate with skilled craftspeople and jewelers.

“Neither of us went to school for fashion design,” concedes Rati. “But we grew up around fantastic workmanship. Embroidery and beading are very much part of the culture in India and those skills are passed down through generations.”

The Yatra collection features dresses, tunics, tops, and jackets with traditionally-embroidered Indian motifs and intricate beading. But what sets them apart is often an added design twist.

For instance, a simple linen tunic features cuffed sleeves. A sleek, silk jacket is a contemporary take on a sherwani, a traditional long jacket worn on formal occasions.

In India, clothing samples go through many iterations until the garments are finalized.

“The silhouettes are very important to get right. In America, the cuts women prefer are more tailored than in India. Our workmanship is rooted in tradition, but our cuts are very modern,” Rati explains.

The company works exclusively with small, often family-run workshops. “We support a diverse group of women and men artisans in India who in turn support their extended families and local communities,” Rati explains.

Yatra also gives back by donating 20 percent of U.S. trunk show sales to local nonprofits. In the past, the company donated to the Washington volunteer fire department after a popup sale held at KMR Arts.

“We feel like we’re lucky, we’re in a great position to do a little bit to improve this world,” she says.

Customers are drawn to the superb craftsmanship and colorful styles of the collection, but they appreciate hearing the backstory about the lives of the artisans who create the pieces.

The greatest joy for these two designers is working one-on-one with the craftsmen and allowing the synergy to develop.

“These women are very proud of their work, and that, in turn, inspires us,” Rati says.

As for that ever-affable golden, Rati named her Zara—after that other women’s fashion retailer, of course.