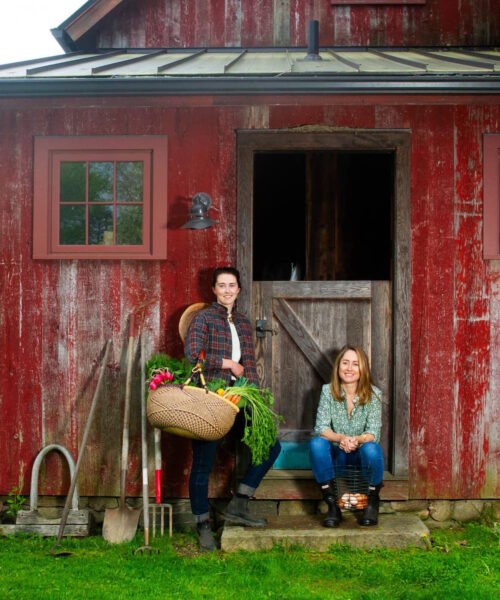 What person with a moderately green thumb and a taste for fresh vegetables hasn’t driven by a charming country farm with its clapboard house, antique barns, and rolling fields dotted picturesquely with grazing cattle and thought, I could do that? To most people, this is just a passing fancy, a bucolic daydream quickly replaced by other musings. But not to Nina and Mike Patterson.

When they bought the old Back 40 farm on Lower Church Hill Road in Washington Depot last July neither of them had ever farmed before. They relocated to the area from New York City during the pandemic and Mike continues to work in finance. “This had once been a farm,” says Nina. “The previous owners had originally been gung-ho and built out the fields, but they lost interest and didn’t have the bandwidth to keep it up. When we bought it the land had been fallow for two years. So I decided to make a go of it.”

Nina’s vision for the farm was to create an organic farm that would offer a community supported agriculture (“CSA”) program providing nutritious vegetables, as well as flowers, honey and mushrooms, for local consumers and businesses. She and Mike dubbed it “Helmstead Farm,” which she says comes from the names of their three children: H for Henry, EL for Eleanor and M for Maddie. “And of course we liked the play on homestead—plus my husband was in the navy and he loves any maritime reference.”

To help realize her dream, Nina brought on Enya Cunningham to be the farm manager. Together they have worked to update the farm’s outbuildings, restart planting and bring out their first produce. “We want Helmstead to be a regenerative farm,” says Enya. “We are transitioning to a low-till system that will focus on rebuilding the soil, reducing synthetic fertilizers and pesticides, and making it healthier. In the long run, it will make it less expensive to operate, as well as more organic. It just takes a lot more physical labor upfront.”

While the property covers 85 acres so far they are only growing on approximately three acres. “The eight-year plan is to continue to develop more of the land and eventually add in orchards, hedge rows and ruminants, which is all helpful to the farm’s biodiversity,” says Nina. “The hope with the CSA is to address not just organic farming but also food insecurity in the area.”

In addition to their CSA, the farm is currently working with The Mayflower, Troutbeck, and New Morning Market, as well as the Litchfield Farmers’ Market. Joel Viehland, the former chef at Swyft in Kent, is managing the crop list and the farm has been chosen to grow seeds for Blue Hill at Stone Barns. Already crops include garlic, tomatoes, fennel, winter squash, cucumbers, bok choy, escarole, cabbage and kale. Future plans include growing pawpaws, native persimmons, hardy kiwis, and hybrid chestnuts.

But the farm isn’t all work. “See this barn?” says Nina with a laugh. “It’s a working barn in the back and a party barn in the front.”