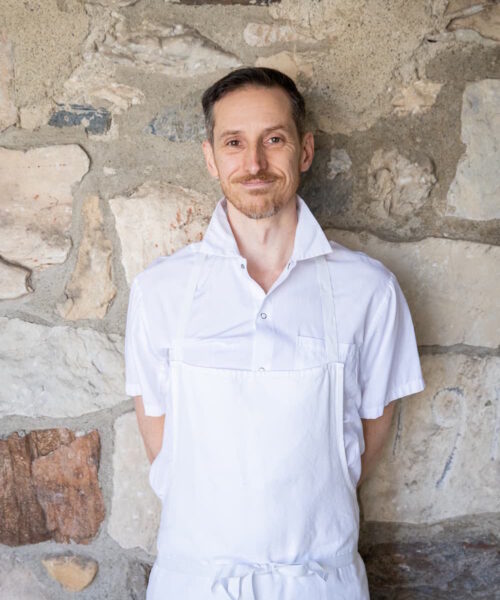 Gabe McMackin: A soulful chef who keeps it real

Even as a child, Gabe McMackin was fascinated with food.

Not just where it comes from, but how it brings people together, creates memories.

Growing up in Woodbury, he recalls the sensation of settling into a patch of raspberries, “not worried about the poison ivy I was sitting in, but just gorging myself on raspberries because they were soooo incredible.

“That kind of thing, and to be able to say to somebody, ‘Come try this stuff!’ was amazing as a young person. And I never really lost that excitement for it.”

These days, McMackin gets to take people on new culinary journeys as executive chef at Troutbeck, a bucolic 250-acre property with a hotel and restaurant in Amenia.

An estate, country inn, and tavern since 1765, Troutbeck has a storied past. Beloved by luminaries from Ralph Waldo Emerson to Mark Twain, it also counts Langston Hughes among its many notable visitors.

McMackin’s focus is on fresh, locally sourced food. He describes it as American cuisine, but cuisine that’s “aware of the foods of other cultures,” and cuisine that surprises.

“Summer brings vibrant salads with things like heirloom tomatoes, Habanada and Aji Dulce peppers, husk cherries and herbs. Roasted chicken with sweet corn and chanterelles is often on the menu, as is steelhead trout from Hudson Valley Fisheries with summer beans and littleneck clam panzanella.”

Foraged ingredients often contribute to beautifully plated dishes. “Whether you’re looking for salad and a glass of wine, or to celebrate a special occasion, the food has to feel good,” he says.

McMackin’s years of experience include work at The Mayflower and Thomas Moran’s Petite Syrah in New Preston, along with New York’s Blue Hill Stone Barns and Gramercy Tavern. He earned a Michelin star as chef/owner of The Finch, in Brooklyn.

Brooklyn is also where he and his family lived before returning to Woodbury in March 2020, when the pandemic hit.

“I was thinking we’d be here just a couple weeks and we’ve been here ever since. Unfortunately, I had to shut my restaurant in Brooklyn, but I was thrilled to be able to dig a little deeper at Troutbeck and really reconnect in a wonderful way…”

Looking back to early moments that influenced his career, McMackin says, “I remember things like my mom picking rhubarb when I was first learning to walk, my father picking pears off a pear tree, or being able to taste what a wild grape was like.”

In the beginning, while prepping food in restaurants, he learned to focus on ingredients. He saw how experimenting with changes, such as adding cheese, influenced flavors and textures.

Some of that experimentation was inspired by his years at Washington Montessori School, where exploration is encouraged.

“I started going there when I was five and a half,” he says, of the school where his mother still teaches music. “My son, Jasper, is now five and a half and at the same school for his first year. It’s an amazing thing to be able to send him there.”

McMackin’s fascination with food continues with each tweak of Troutbeck’s seasonal menus.

“What I’m most proud of is our incredible team,” he says. “We put our heads together and say, ‘What can we do with this stuff that’s great, and that people are going to love to eat?’ And that’s what comes out.”