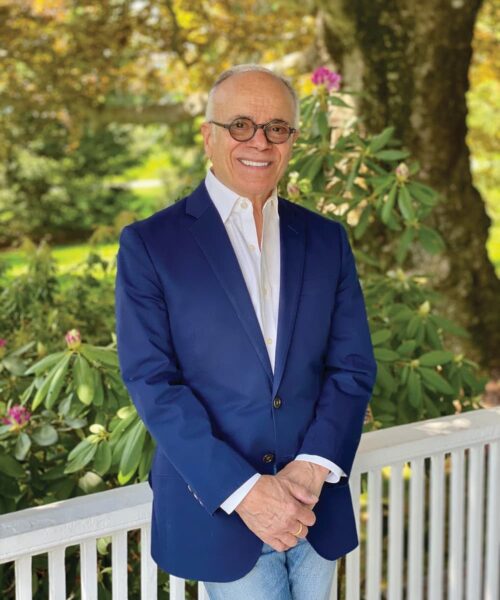 Twenty years ago, my family and I decamped from Brooklyn to Bethlehem—two places that have little in common other than beginning with the same consonant. Brooklyn was a literary mecca. I couldn’t walk my dog without running into a half-dozen other writers. Bethlehem? I was more likely to run into a cow.  I was a bit lonely for writerly company. But then I met a handsome, spry, gentleman who changed all that: Joseph Montebello.

A new generation of writers have since moved to Litchfield County, and if we are bits of fabric in a patchwork quilt, Joseph was the stitching. It was devastating to hear of his untimely death in September. It is impossible to imagine attending literary events everywhere from the Oliver Wolcott Library to the Gunn Memorial Library without Joseph, an elegant, erudite moderator. To be in conversation with him—on stage and off—was to feel attended to. He was a careful listener, with a laugh that was at once easy, and had to be earned.

Joseph was 80 at the time of his death, though he had such a light spirit that he seemed easily ten years younger. He and Ron Leal, his partner of 49 years, moved to Litchfield full-time when they both retired in 2004. Joseph and Ron married in 2005 when civil unions were recognized in Connecticut.

Joseph had been Creative Director and Style Editor at HarperCollins, laudable positions that highlighted his great sense of design and style, but his degree from Syracuse University was in journalism, and writing—along with Ron—had his heart. He was able to fulfill that dream in Litchfield County, writing countless articles and profiles for Litchfield Magazine.

I will always think of Joseph seated at his large round dining table in the beautiful home in Litchfield he and Ron shared with their six Westies, Amy, Carrie, Emma, Portia, Cate, and Maggie. The entire room was surrounded by immaculately curated books. Consummate hosts, the pair brought friends together and into a world that felt warm, glamorous, safe, fun, and most of all, full of love. “I believe he died the happiest he had ever been, because his love of this community was returned tenfold,” Ron says.

Here’s to a life well-lived, Joseph Montebello. You have left an indelible mark, and you will be sorely missed by all who respected and loved you.