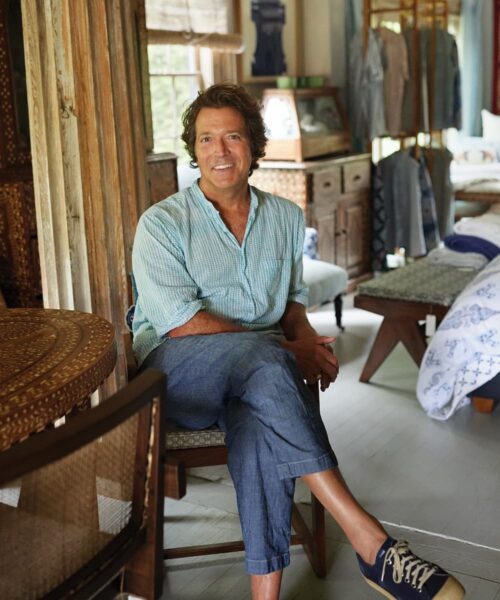 Along US-7 in Falls Village is John Robshaw’s transportive new interiors shop, an emporium of vintage fabric bolts, furniture, bedding, artwork, and antiques. Unassuming from the outside, this is a secret waiting to be divulged. But John Robshaw’s store is no mirage—it’s truly a little shop of treasures.

Robshaw’s design background burgeoned while studying at Pratt Institute. His professor encouraged him to go on a work trip to Mumbai, where Robshaw discovered block printing. He returned to New York where he honed his craft by block printing yards of upholstery fabric. He later developed his passion into a flourishing textiles business, which now sells hand-drawn and patterned pillows, linens, towels, and more. He’s since worked with major department stores and private clients, designed the interiors for Litchfield County’s Falls Village Inn, and launched a children’s décor line with Crate & Barrel.

Robshaw landed in Connecticut nearly two decades ago in search of a respite from New York City. He was attracted to Litchfield County’s farm properties large enough to hone his block printing craft, its community of designers, and the quick drive from Manhattan. He initially rented from fellow designers Carolina Irving and Daniel Romualdez in Kent, then purchased his own home in Sharon, where he now resides with his wife, photographer Rachel Robshaw, and their daughter.

He opened his first store last year in a former Falls Village farmhouse. “I always thought it would be fun to have a shop in Connecticut because there are so many designers that come up here shopping,” says Robshaw. “People that are around this area are dropping their kids off at boarding school, and they may have a house in Greenwich or Palm Beach or Colorado. It’s fun around here because everybody is jumping all over.”

“It’s an old house, so there are different bedrooms, a kitchen, a living room, and it has the flow of an old house,” says Robshaw. He uses this layout to his advantage by creating vignettes throughout the store. For example, a downstairs bedroom with Robshaw-patterned bedding, Indian wallhangings, and an upholstered settee give way to a tucked away cupboard full of fabrics. Hostess gifts from lands far away include Myanmarese red dye pots, tables with camel bone inlay, and hand-painted pillows. It’s cacophonous, smashing, and a delicious feast for the eyes.

In the backyard is a barn chock-a-block with wooden chairs, rugs, mirrors, and other Indian antiques. Rare finds include a towering wooden canoe and ornate bajots. “It’s really nice to create this environment that is interesting and lets people wander around and find things. The mix of the old antiques and new projects is fun because it gives more layers,” says Robshaw.

Robshaw occasionally works at the shop on weekends, so lucky visitors may shop the souk with the designer himself.