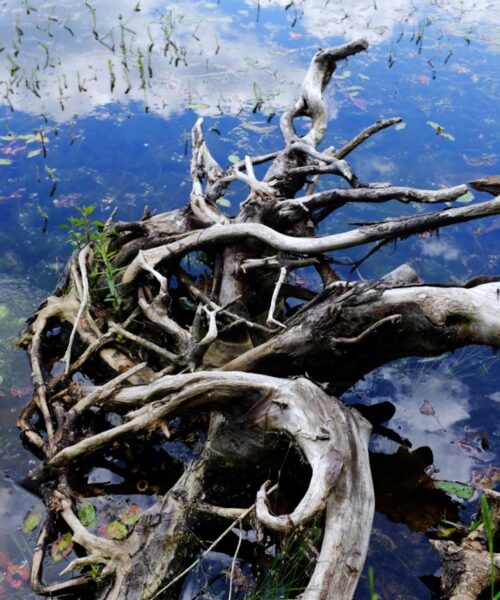 Covid-19: Fragment from The Salt Diaries

This is the ninth of an essay series that will be published as long as social distancing is necessary. All pieces are written by Litchfield County residents. If you are interested in submitting an essay for consideration please email us at info@litchfieldmagazine.com.

By Florin Firimita of Winchester, CT

It seems that God is going to deduct this entire year out of our paychecks. Everything these days—the past, the present and the future—is at a standstill. We are living inside a horizontal hourglass. Within this parenthesis, I feel wealthy: I own everything I set my eyes on: the woods and trails of the White Memorial; the entire Topsmead State Forest; the thousands of daffodils at Laurel Ridge Farm. I am also the proud owner of several invisible islands, an archipelago of sorts. I have been aware of the existence of some of them before: Hunger, Loneliness, Confusion, Fear, Heartbreak. Some are new: Anxiety, Doubt, Resilience, Time. There is time but I’m already tired of time. There are people, but they’re not real. Each face on our endless Zoom meetings becomes an island, each island becomes a mask. Some of us are Tiktoking our way through private tunnels of fear. Some of us are spending hours on yoga mats. Life continues and so does the slaughter. This is how it’s supposed to be on planets where you can’t leave your space station without any armor and an oxygen tank attached to your back. In the past several months we have become deep sea divers in the ocean of Doubt and Uncertainty.

From the deceiving safety of our Litchfield Hills, the world’s collective pain seems far away. I think about how every milestone that we have been reaching these days is tragic: more Americans died because of this virus than during the Vietnam war; there are now 1 million confirmed cases in the country. Yet, the numbers are here, they are real and they change by the hour: 1,065 confirmed cases and 95 deaths in our county. I think about the ER physician in Manhattan, who committed suicide. It’s not that complicated to feel guilty while getting ready to enter a grocery store the way you enter a combat zone and think that you could die in a few days because you touched a can of beans or opened your mail. I am ashamed of being afraid. During the good old Cold War days I lived In Romania. During that country’s violent revolution, I became good at dodging bullets. There was a physicality to the sound of a bullet coming at you, entering the trunk of a tree or the body of an anti-government protester. As an American I am dodging fog bullets. Trust me; the fog ones are as real as the metal ones.

Some believe that one cannot die at the beach on a sunny day. Some believe that you could point a gun at a virus as if performing some sort of exorcism. I think it was Camus who said that all deaths are absurd, but I think that all lives are meaningful. The past and the future are equally fictitious. One gets transformed by memory, the other by hope. The only reality I am afraid, is that of Today. I have friends who are physicians. We shouldn’t call them “heroes” now more than six months ago. They were heroes back then, when they were showing up for work every day and when we took them for granted. We have been taking a lot of things and a lot of people for granted. I post pictures of my cat on Facebook while someone commits suicide in Manhattan. What’s my excuse? To remove the halo of fear from my days? To keep my illusionary band marching on?

From my European perspective – industriousness is primarily an American thing. Nothing wrong with it. It made us who we are. All of a sudden, we are painting our homes, attending virtual concerts, moving dirt around, building additions to our homes. We are super busy, all the time, every time, day and night, as if some sort of moral judgement awaits us at the end of each day ready to strike. I have no major projects to work on. No retaining walls to build, no paint jobs, no office remodeling projects, nothing to prove. I have already written a novel, so what should I write now? The restless ants working inside my brain are spilling into my sink and into the pages of my journal, feeding on the scattered leftovers of my past lives.

“I hate public displays of affection,” a woman I once loved used to tell me. It was embarrassing to be seen in public holding hands, to read Neruda or Leonard Cohen in the burned shadow of the Notre Dame cathedral, or to say I love you. Some of us have been practicing social distancing well before it became the law. My sink full of dishes disagrees that appearances must be kept at all cost.

And even if technology has been making us more connected than ever, we are still unable to live with ourselves. After the screens of our devices turn dark, after we run out of movies, after the music stops, reality kicks in like a long-lasting toothache. Only a few of our children know how to reach for their inner selves. They don’t know that aloneness is not loneliness; that aloneness is balance. There is an untranslatable Spanish word: “recogimiento” that is often mentioned when it comes to Borges. The blind poet is the ultimate embodiment of this concept. It has nothing to do with creating a prison within yourself. Living in “recogimiento” is about discovering your inner resources and opening the pantry of your soul, finding that even in the darkest hours, you have enough resources. I am not sure how one gets there, but if you do, your fears will stop translating into being busy all the time. Being busy is a type of avoiding our reflections in the vast army of mirrors surrounding us

This will be transformative for most of us. Yet, strangely, the Plague has no power over me except for making me look a little closer at myself. We, Americans, are a bit guilty of blindness, the type that comes with a sense of entitlement. Maybe the American dream needs to be power washed by a tragedy of this magnitude in order for us to wake up. Would it hurt to hold hands again? To pay a little more attention? A little bit more than during the last world war, when we kept dancing to Artie Shaw while the ovens of Auschwitz were working nonstop. A little bit more than after 9/11, when we realized that we were not a happy island anymore. Maybe that’s a type of contribution we could all make while allowing our selves to be filtered through this tragedy. From our self-centered insularity of the beautiful area of Connecticut we live in, maybe it’s time to start learning the names of our neighbors, to have real conversations and meaningful relationships, to do more for each other, to hold hands, to say I love you, to realize that each of us are insanely wealthy just because we are able to open our eyes every morning.