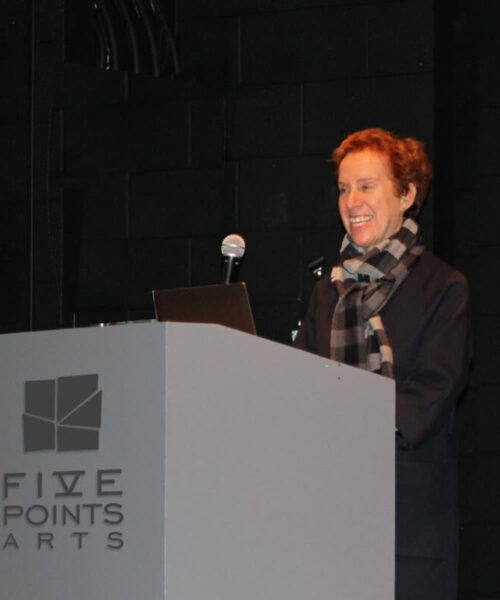 Guston’s breakthrough from abstraction into topical figuration, for example, was driven by civil rights struggles going on around him. For Joan Mitchell, becoming an expatriate in France led to a major blossoming in her work. What made the talk particularly appropriate for this location and audience is that Temkin, who was raised and attended public schools in Torrington before moving on to Harvard and Yale, was here to celebrate a breakthrough of another sort, the 10th anniversary of Five Points Art and its new facilities at the Five Points Art Center Itself. It took an analogous change of circumstances, together with the creative vision of dedicated individuals, for the Five Points Art Center to come into being.

The new Five Points Arts Center represents a huge step forward for an already successful enterprise. Five Points Gallery, located in Torrington’s historic downtown opposite the Warner Theater and Nutmeg Ballet Conservatory, evolved from a temporary gallery set up by the Torrington Arts and Culture Commission in 2012. That gallery’s success led to the formation of a not-for-profit visual arts organization and Five Points Gallery. To date, Five Points has featured the work of approximately 730 regional, national, and international artists, and expanded to 3,800 square feet of exhibition space, cementing Torrington’s rebirth as an arts destination.

In 2018, another opportunity came their way. The trustees of the University of Connecticut had decided to sell their Torrington campus (closed in 2016 due to declining enrollment) four miles northwest of downtown. According to Judith McElhone, founder and executive director of Five Points, the possibility came “out of left field” yet “was so right to continue our mission… to give artists and community members the equipment, facilities and support they need to make their art.” After two years of negotiations they finalized a deal and began transforming 30,000 square feet of indoor space into cutting-edge painting, ceramics, and electronic art studios, punctuated by a stunning double-height printmaking space.

“It’s really in that spirit that I want to send the Five Points Arts Center off to its second decade. This building that’s already proof of incredible self-renewal and institutional breakthrough, like artistic breakthrough is less of a lightning strike and more continued reinvention and ongoing dedication. On the 10th anniversary let’s celebrate Five Points and all of you here who collectively embody sustained creativity.