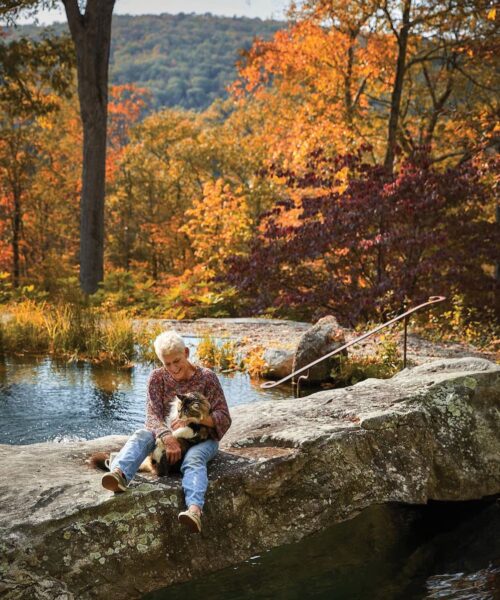 Wendy Goidell was merely looking for a real estate investment when she found the 25-acre site in Wassaic. “It was reasonably priced and adjacent to a state park, I didn’t see a downside,” Goidell recalls. That was back in 2003 when she was renting a weekend house in the area while working as a film stylist in the city. If you noticed the flowers and greens in The First Wives Club, Analyze This, The Thomas Crown Affair, or Meet the Parents, they were Goidell’s work. 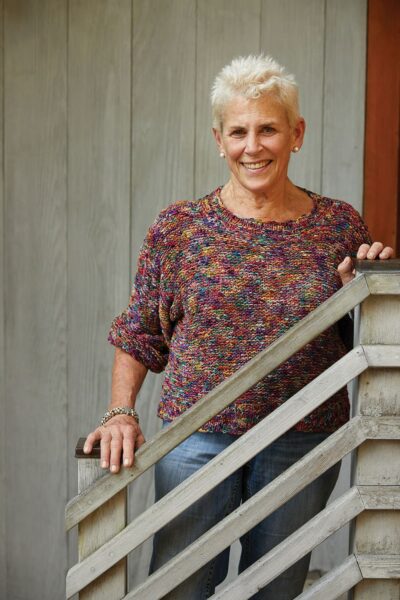 Not long after buying the investment acreage, Goidell began the serious business of house-hunting because renting wasn’t really Goidell’s long-term plan. “Basically, I looked at about a thousand houses that I didn’t like,” she summed up the buying search. And that’s when she ended up at her realtors’ converted barn home. It wasn’t for sale, but she loved the spacious open floor plan. And suddenly it hit her, “I realized that I could actually build a house if I kept it simple.” From that point onward, she began looking at her investment property from a whole different perspective. However, Goidell’s version of “simple” included geothermal radiant heat, solar panels, and green energy. Another little wrinkle was that her Amenia dream house would need to be blasted out of stone.

Not only is ledge omnipresent on the Amenia property, but the grade is strictly vertical. While the house was becoming a reality, landscaping was also part of Goidell’s picture. But finding spaces sufficiently level to allow plants to get a foothold was a challenge until the contractor suggested using the massive rocks to brace terraces. Three levels later, Goidell called up Andy Durbridge to install a few trees around the house while stairs to access the house were chiseled into the hillside and edged with drought-tolerant calamintha. Blueberries were inserted as well as other plants that fit with the wild look.

Not long afterward, Goidell happened upon an article about natural swimming ponds and was instantly intrigued. But she could find nobody with the knowledge necessary to tackle the project in our region. Finally, she found Chris Rawlings who had just completed a stint in Europe studying natural ponds.

Again, the boulders in situ were put into service for the project. The natural pond theory utilizes shelves of plant life to filter the water—and the stones on site were perfectly suited. At first, Goidell wanted the pool out of sight from the house so her little indulgence would not make a big splash in the scene. Rawlings convinced her that the pool should be sited proudly and prominently just footsteps from the house’s blue-stone back patio. In the end, Goidell agreed and now acknowledges that the natural pond sets the mood for the property. Surrounded by stone, feeling congruous with its surroundings, and with a breathtaking view of the surrounding scenery, the pool fits hand-in-glove with the land. The crowning jewel in the con-figuration is a whale of a rock that serves as a jumping-off point sprawled across the middle of the pool. Not only does her little water feature keep Goidell cool in season, but it becomes a gathering place when friends come to visit. Plus, the natural pool is a hotspot for Goidell’s cat, Sammy.

Garden designer Ana Hajduk of Singing Brook Gardens crafted plantings around the natural pond, anchoring it in irises, rudbeckias, carex, and ornamental grasses that manage to survive the challenging terrain without requiring continual irrigation. Hajduk also tucked gardens farther afield. Practical plantings were installed. Down from the summit of the hill, a fruit orchard produces peaches, pears, and edible quince. A vegetable/cutting garden furnishes sustenance for dinner as well as food for the soul beside the bank of solar collectors. Everything feels so apropos for the place—it’s a testimony for liv-ing in concert with nature without a heavy footprint. And the scene is achingly beautiful in all seasons of the year. Even when the weather is too brisk for swimming, the pond is a strong part of the place’s personality—framing the view of the surrounding forest in its fiery autumn wardrobe.