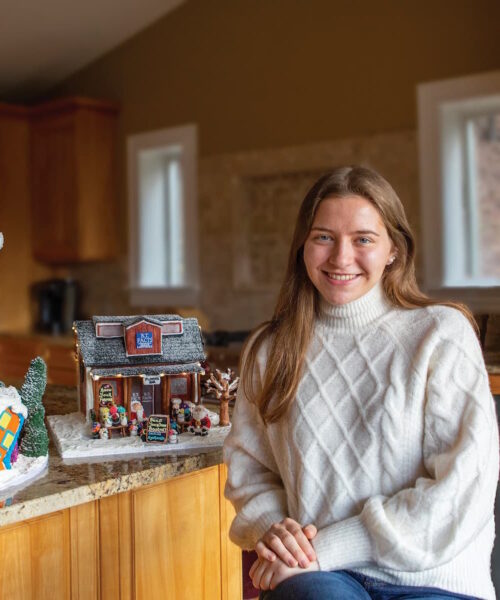 Brittany Hrabcsak is passionate about baking all year ‘round. As the holidays approach, she has a singular focus: designing, baking, and building gingerbread houses. The 21-year-old college student has been fine tuning her craft for some time. She began assembling gingerbread houses from a box when she was very little; a dozen years ago, she attended a make-and-take event at the Silo in New Milford. Now, for a decade, the South Kent resident has been crafting gingerbread houses—from dough to powdered-sugar dusting—entirely from scratch in her home kitchen. As to her best tip for beginners? “It’s not always going to go perfectly, so you have to keep trying.”

Hrabcsak’s calm demeanor is misleading, as the details are dizzying. It all starts with a theme, dreamed up in her head, which is translated to construction-paper then transferred to parchment before it is cut out in dough. Ideal thickness ranges from ⅛ -¼ inch, depending on the overall size of the house, with weight-bearing walls trending thicker, the roof thinner. Then comes the fun part: frosting. “We haven’t found the perfect recipe,” Hrabcsak says of royal icing. The entirely edible “glue” that holds the house together and pipes intricate details is kept stable and smooth with egg whites and cream of tartar. “If the icing is too thick, it holds well but is hard to get out of the [piping] bag,” says Hrabcsak, “and vice versa.” Balance, therefore, is the goal.

Five years ago, Hrabcsak entered the Kent Gingerbread Festival for the first time—a sweet, local celebration touted as one of the largest gingerbread festivals in the state. Last year she had two entries: the first, a replica of the Kent Flower Market (commissioned for display at RT Facts); the second, a replica Whoville of her own design (from How The Grinch Stole Christmas), which went on to snag the contest’s grand prize. When it comes to decorating, modeling chocolate and fondant—in up to 15 different colors—are the stars. There are a few shortcuts, silicone molds and pop-out impressions, but the rest is just hard work and attention to detail. “It takes a while, step-by-step,” she cautions while pointing to the fun: making it colorful, crafting figurines, using sprinkles. Last year Hrabcsak mastered the skill of making flowers, noting “I’ve never had to be that detailed before [working on the Kent Flower Farm replica].”

Hrabcsak gets a second pair of hands from her mom, Melissa. The pair work, on and off, a few hours each day and most of the weekends leading up to Thanksgiving; in total, each house can take up to five full days to complete “if working straight,” says Hrbcsak. Challenges do abound, even with oodles of experience. One year, they ran out of powdered sugar. “I plan ahead, but there’s always something,” she says, understandable considering the countless pounds of ingredients required. After the final flourish of frosting has been piped then comes transport (which Hrabcsak also has down to a science): “Put the house in the trunk of the car, and drive very slowly.” While Hrabcsak is hard at work on this year’s entry, for the Kent Gingerbread Festival’s 10th Anniversary, her theme remains under wraps. While gingerbread houses generally shine as decorations in December, come January they are put to equally good use. “We feed them to the animals,” Hrabcsak says, before mom chimes in: “The squirrels and the birds love them.”