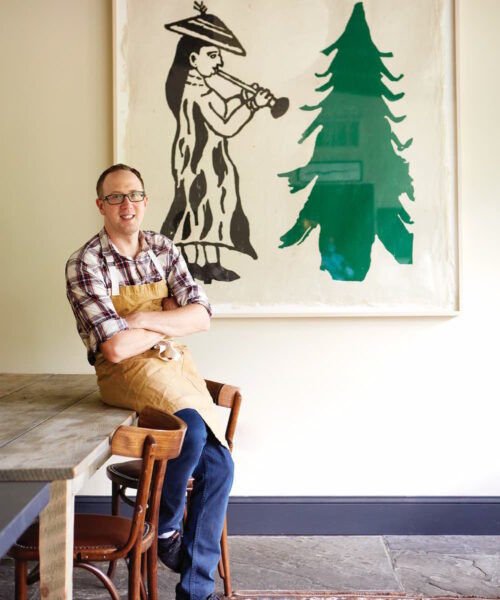 The White Hart Inn in Salisbury is one of the grande dames of Litchfield County. Originally built in 1806 as a farmhouse, it has been a place where both locals and weekend guests can enjoy a pint in the Tap Room, have a sundowner on its spacious front porch, celebrate a wedding, or eat lunch on its wide lawn.

But for a while it seemed as though the White Hart was finished. In 2010 new owners renovated the inn’s interiors at great expense and introduced an overly elaborate menu. The plan backfired and the inn sat dark for four years. The grande dame appeared to have taken her last bow.

Then in 2014 new owners brought the old girl back to life. They hung works by Jasper Johns, Frank Stella, Terry Winters, Donald Baechler, and others on the walls and installed a new team in the kitchen. One on that team was Paul Pearson, who is head chef. Born and raised in England, Paul first came to the States in 2004 to work at Blantyre in Lenox, MA, and has also worked at Community Table in Washington.

Today his goal is to create traditional food that is low key and family friendly. “We don’t need to have a fancy menu. But that doesn’t mean it can’t be refined. The goal is to make the White Hart a place where the whole community can come.”

Part of that plan has been to streamline the menu and to offer take-away food from White Hart Provisions. Unlike in the past, today there is one menu for both the restaurant and the Tap Room, offering a selective choice of appetizers, entrees, and desserts utilizing local and seasonal ingredients. The beef used in the hamburger, for example, is from Whippoorwill Farm in nearby Lakeville, and the lettuce from Common Hands Farm in Hillsdale, NY.

Other favorites include the chermoula roasted chicken; grilled peach with goat cheese and dukkah; and lentil dahl with cauliflower, crème fraîche, scallions, and toast.

“I love this part of the world,” says Paul. “The products available, the openness, the seasons. I feel so lucky to live here and raise a family.” Diners at the White Hart are lucky to have him.