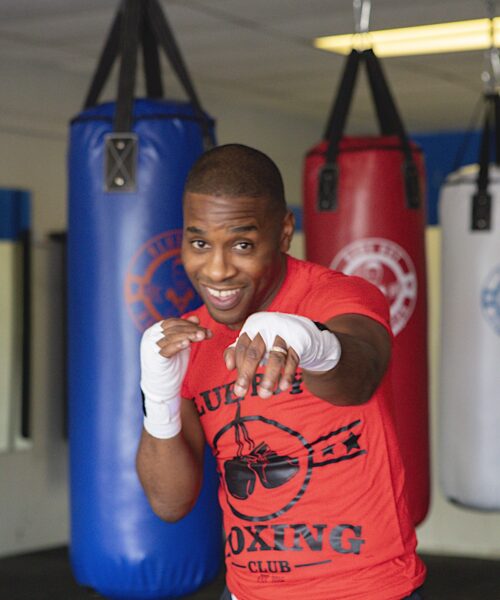 Much More Than a Punching Bag

As you drive by on Route 6 in Thomaston you might never know the “sweet science” is being taught in a small mall off the roadway.

But that’s where Kareem Blue, owner of Blue Boy Boxing along with his wife Nina, are instructing kids and older people, men and women, to get into the ring which is set up in a well-lit 5,000-square-foot space. The gym boasts dozens of workout (aka punching) bags, weights, cardio equipment, and wall-to-wall mirrors for shadow boxing.

Sarah Moraes of New Milford is training for her Mixed Martial Arts (MMA) debut and travels to Blue Boy Boxing twice a week. “This is an amazing gym, “and Blue—it seems everyone calls the owner by his colorful last name—is a great coach.”

Kareem Blue grew up in the lower east side of Manhattan and started boxing at the age of eight—learning from a family friend. He became proficient at the sport, posting a 19-1 amateur record and fighting in the Golden Gloves tournament before he injured his back and had to give up competition. Yet, he continued to spar and train.

After moving to Bethlehem to be closer to his wife’s family and for “a change of pace,” Blue began training several individuals in boxing at the Litchfield Athletic Club where he was a physical trainer. “I began working with a few people who just happened to see me shadow boxing one day, but the club wasn’t really equipped for boxing. I knew a person who had this space in Thomaston and I put $1,000 down on a lease. I called my wife and she asked if I had found a job because I was out looking. I said “No, but we have a business.”

After being taken aback, Nina Blue was on board, “I knew Kareem would make it work.” And he did. Blue Boy Boxing opened four years ago and has a devoted and growing clientele. The gym closed for a few months because of the COVID-19 pandemic, but reopened in May. 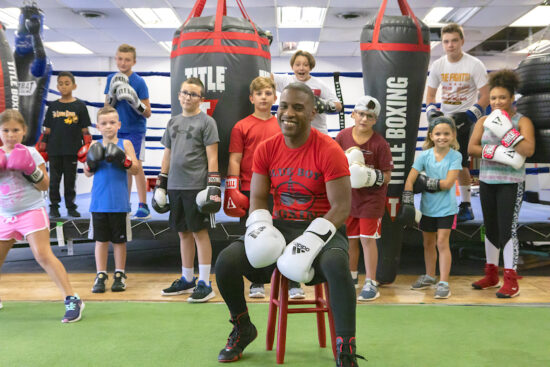 Blue has produced several champs. Julian Smith of Waterbury won a Western New England Golden Gloves title this year in the 201-pound novice class, and Brad Turner of Bethlehem, while at Michigan State University in 2015, won a 201-pound novice United States Intercollegiate Boxing Association title. Turner trained with Blue before the latter opened the club. The Blues’ 12-year-old daughter, Skyy, won a medal at the Connecticut Silver Gloves tournament in Ansonia last year, as did Jalen Cornell of Naugatuck. The Blue’s young son, Beau, seven, also plans to compete in the Silver Gloves.

“We get every age coming here,” said Kareem Blue, “from eight to 80. We get housewives and kids. We have a class of around ten people with Parkinson’s Disease that we train because it has been found that skills used in boxing can help with some of the effects of the disease. Some people use training as a way to get in shape and that is fine. But everything we do is built around boxing. The gym draws from Litchfield County and beyond. Said Kareem Blue, “People think boxing is all about fighting but it is so much more. It teaches you confidence, focus, and strategy.”