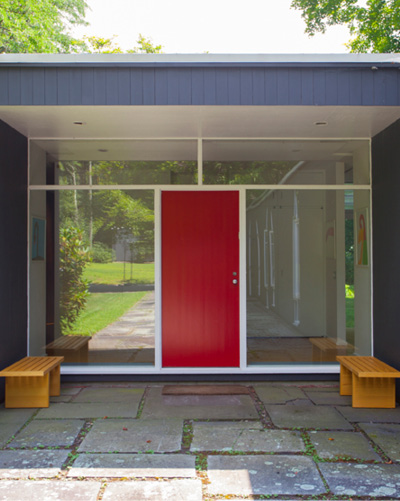 THE MARSTERS HOUSE IN LITCHFIELD

A Modernist Gem for Sale

One of the rare surviving examples of Edward Larrabee Barnes’ platform house with many original details in place, the exquisite Marsters House in Litchfield is on the market. by sarah parker young

“I’ve always been drawn to making things as simple as possible, if you can do that without making them inhuman or dull or oppressive.
–EDWARD LARRABEE BARNES

Marsters House, originally built in 1953, is a significant example of the ‘platform house’, a design conceived by renowned architect Edward Larrabee Barnes. Every detail stays true to early modernism with clean lines and an elegant grid of rectangular indoor and outdoor rooms. The provenance of the house adds to its interest as the home was designed for Ted Marsters, a classmate of Barnes at Harvard, and his wife Kathy who is the sister of Rufus Stillman, a patron and supporter of Marcel Breuer and modernist architecture in Litchfield at that time.

Edward Larrabee Barnes went to Harvard Graduate School of Design where he studied under the Hungarian born Breuer, considered to be one of the masters of Modernist Architecture. These early influences were keys to his development as an architect and on a personal note; he met his wife Mary through Breuer. He started his business in New York City in an unassuming way by placing an architectural drafting board on his dining room table. His first project was to create a small lecture room at the Herald Tribune for the editor and this lead to being asked to design his house. His wife, Mary Barnes, become the chief interior designer for the firm and Edward Larrabee Barnes Associates began a long successful run in the world of American architecture.

The ‘platform house’ was a perfect concept for the modern era. The architect himself, expounded on the design, “The thing about the platform houses is that they are like a game with specific rules,” he continues, “all the clients for those houses, myself included, did not have much money for the house but lots of land. Now contemporary developments are the reverse with huge houses much too close together.”

Barnes’ plan for the Marsters residence sought to establish functional indoor-outdoor relationships, thus bringing nature into the design. Central to this concept was to enlarge the foundation of the building to support a platform that would serve as a terrace without walls. In this way the eye would see the outdoor vistas as a continuation of the interior spaces. A  ‘Z’-shaped plan was developed for the Marsters house that placed narrow wings of the house as bookends to a large living room with an impressive statement piece masonry fireplace. The stone foundation was further enhanced by attractive paved walks and interlocking geometric areas of lawn. The home itself had many impressive features including original slate heated floors, walls of windows and sliding doors with westerly views, terraces and over nine acres of protected farmland. Additionally, there are four bedrooms, three and a half baths, a family room, dining room, kitchen, mudroom and the originally designed white concrete pool.

Pam Hanson, daughter of the Marsters, spoke eloquently about how nature was an intricate element of the indoor/outdoor design of the house. “I loved to get up in the middle of the night and, through the huge glass walls, see the storms race across the western hills.”

Barnes designed many office buildings, museums, botanical gardens, private houses, churches, schools, camps, colleges, campus planning, and housing. Some of the more recognized designs include the Dallas Museum of Art, the Walker Art Center, and the IBM Building at 590 Madison Avenue in Manhattan. Throughout this time, he also taught at Harvard University, the Pratt Institute, and the University of Virginia. He was part of a modernist movement in architecture, and specifically with Breuer, Johannsen and Noyes in Litchfield County.

As listing agents of such an important architectural example of modernism, Stacey and Pels Matthews enthuse, “We are very excited and honored to work with the owners of this property to find the next steward of the Marsters House. It’s an authentic mid-century work which is important to both our community and the design world at large. We also love that it’s a lived-in house – not a museum – and will reward the next occupant with its fabulous layout and style as either a full-time or weekend home.”

For more information or to make an appointment to see the house, contact Stacey or Pels Matthews at: