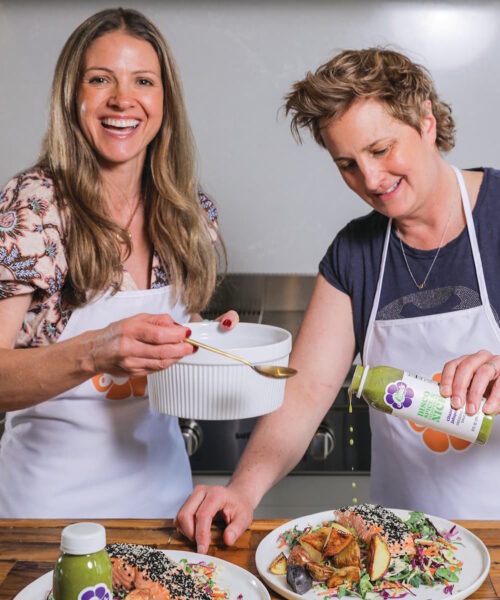 When their lease in New York City was up last year, Kristin Hurd and Lisa Roberts Hurd set their sights on moving north, literally in search of greener pastures. Litchfield County’s pastoral beauty and welcoming communities were an instant draw.

For Lisa, who was born and raised in Hartford County, it was also a homecoming of sorts, and an easy decision to raise their 9-year-old son Grayson in her home state.

As if moving during a pandemic is not sufficiently challenging, the couple—inspired by personal journeys that led to discovering the healing powers of clean eating—also launched a business.

Today, the Roxbury residents are the faces behind Lisa’s 1973, a new line of locally-crafted salad dressings and sauces that easily transform meals from bland into indulgent.

From playing chef in early childhood, Lisa’s mastery evolved throughout adulthood. Educated at The University of Oxford, she became a culinary archeologist, attended The French Culinary Institute (now the International Culinary Center), is a board-certified health coach, and a Stanford University instructor.

She had studied the healing power of nutrition, but never personalized the concepts until after suffering for years from untreated autoimmune conditions such as celiac disease and fibromyalgia.

Kristin, an award-winning real estate broker with Sotheby’s in New York City, faced her own challenges. A former college athlete, she was diagnosed in her 30s with a congenital heart condition requiring open-heart surgery.

As a result, both struggled with anxiety and addiction. Pursuing a better quality of life became necessary, especially upon realizing that even seemingly healthy foods at upscale restaurants are ladened with inflammation-causing additives. The eye-opening experience revolutionized their way of eating.

“I started applying food as medicine,” Lisa explains. “The word ‘diet’ comes from the Greek word ‘dieta’ which means way of life and that’s what we began doing.”

More time at home during the recent pandemic allowed them to experiment with flavors. The results received accolades from family and friends, leading to the creation of Lisa’s 1973.

Together, they “wear every single hat,” from preparing sauces—Lisa “tinkers” in the kitchen up to 10 hours a day—to processing orders, boxing, and shipping. More than 5,000 bottles later, they gratefully acknowledge community support for their success.

When not leading real estate teams or handling transactions in the Tri-State area, Kristin is the marketing force and designated taste tester behind Lisa’s 1973, she jokes. Their mission, however, is serious.

“Our commitment goes beyond great-testing and super healthy sauces,” Kristin notes. “We know we are taking on food industry giants, but every positive change makes a difference.”

They hope the thoughtfully-sourced and prepared sauces provide convenience, peace of mind, and increased personal control over health.

Lisa’s 1973 is available online and in stores including New Morning Market in Woodbury, The Roxbury Market in Roxbury, The Smithy Market in New Preston, and Maple Bank Farm in Roxbury.