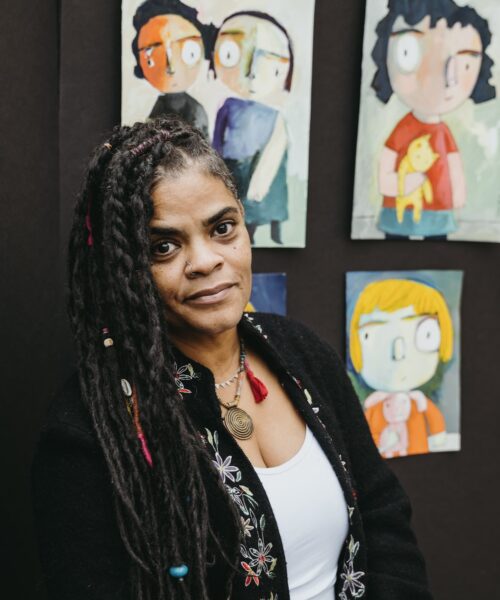 You might think that after growing up among the hustle bustle of the lower East side, Cornwall might be way too subdued a place to put down roots. But for artist Magaly Ohika it offers the solitude she craves. Before she moved into her house, which is perched on a hillside above the Housatonic River, she lived off the grid in a cabin on top of Bald Mountain with her partner George Wolfe, a woodworker.

She shares her house with her mother and space is tight so her studio doubles as her bedroom, but functions like a Matryoshka doll. Within it, she houses her pets: two cats, three rotund hamsters—Jellybean, Twiggy and Willow—and a Chinese dwarf hamster named Loki. Her two dogs have taken up residence on her sofa.

The menagerie of animals are her extended family. So are her colorful, abstract artwork of children, which she calls her “wacky whimsical characters.” The paintings, drawings, and mixed media depictions of children have a primitive doll-like style: their heads are balloon-shaped, and facial expressions are simple marks. She writes in her blog theitsybitsyspill.blogspot.com, “Everything I create is based on the innocence and beauty of children, friendship and the bonding between them and the little gestures that makes them special. The little girl inside me inspires me to stay true to what I love.”

When she was a child, Ohika couldn’t stop drawing. “My Mom would get calls from my elementary school teacher that I was drawing all the time and not doing school work,” she says.

Not surprisingly, she went on to attend Art and Design High School in New York, and after graduating she enrolled at the Fashion Institute of Technology. She landed a job that most kids would consider a dream, designing superhero figures and plush animals for toy companies. But the work kept her from creating her own art.

“It was very limiting. I wanted to paint and I didn’t have that freedom as a designer,” she says. She moved to Puerto Rico with her parents, who are from Puerto Rico. After meeting Wolfe who was traveling there, she moved with him to his hometown Cornwall.

“I don’t have children of my own. I can’t,” Ohika explains further. “So I’ve created my own imaginary characters and I bring them to life by giving them each personality.” As an artist, she finds inspiration for those personalities by observing people, noting their imperfections and their reactions and behaviors. Ohika draws inspiration for her work from artists Jean-Michel Basquiat, Joan Mitchell, Pablo Picasso, Marc Chagall, and Egon Sheile.

She savors the peacefulness of her New England natural surroundings. Winter is one of her favorite times, when the snow falls and houses are strung with holiday lights. “It’s so quiet outside, you can hear the river rolling past and that is all,” she says. “I love my solitude, being near nature, and I can’t live without my art. It’s my oxygen.”