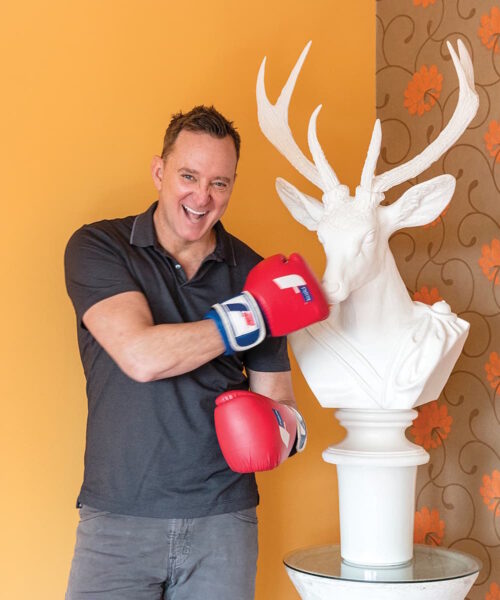 When Mary Beth, the editor of this fine magazine, asked me if I’d like to write something for her garden-themed issue, I said, “Absolutely! Let me pen a column about how deer are a gigantic pain in my A-double-squiggle.” (I’m paraphrasing.) Mary Beth said she wasn’t sure that was a good idea, adding some gibberish about the hordes of people who allegedly like deer. Whatever. I assured her that I would not advocate harming the insatiable monsters in any way. I’m nice! And if she received any scathing criticism from the deer lobby—or from any perturbed deer—she could forward it directly to me and I would handle it. What I didn’t tell her is that by “handle,” I meant “promptly delete without reading.”

Oh, shush. If you can put your rodent prejudices aside, mice are kinda cute. The perky ears, the elongated snout, the charmingly dopey personality. But don’t be fooled. You get a mouse living in your wall and it will drive you legally insane. He’ll run across your toes when you sleep. He’ll eat your best Gouda when your back is turned. He’ll poop in a corner, repeatedly.

A deer will do pretty much the same thing in your garden! Will that deer be freakin’ adorable? Of course! But—and this is a big but—he will trample your precious baby tomato plants! He will chomp your hydrangea buds the split second they burst forth into this world! He will leave a pile of Milk Duds right smack in the middle of your fieldstone pathway, but don’t be fooled—those aren’t Milk Duds!

When we bought our house, it had an electrified deer fence surrounding it, basically three parallel wires anchored into several trees. I didn’t even notice the fence, because we bought the house in the summer. But when the leaves fell and the ferns withered away, those wires became very noticeable and gave the vague impression that we were living in an Estonian detention center.

I said, “These are offensive to my highly developed sense of aesthetics!” Or maybe something less pretentious, like, “Man, those are butt-ugly.” I can’t remember. But I do recall thinking that I didn’t want the zapping of hapless deer on my already-sketchy karmic bank account. So, I hired a contractor to venture into the woods and clip the wires. I’m such an idiot.

The wires came down and that spring the deer population of northwest Connecticut helped themselves to no less than $5,000 worth of annuals, perennials, and vegetables. Rude!

I tried urine, mostly my own and my dog’s. (As a deterrent, just to be clear.) I would even invite my guests to pee in the flower garden, but surprisingly few took me up on it. As it turns out, terrier and human urine don’t work anyway. Coyote urine is effective, but finding a consenting coyote with a full bladder is no easy feat. Some of my followers on social media suggested that I shave bars of Irish Spring soap into the garden. But I don’t like the artificial scent; it’s neither Irish nor spring—discuss. Others said I should go to the local barber shop and ask for a bag of human hair clippings but, honestly, I can’t think of anything I want less in life than a garden filled with the DNA of complete strangers.

Now, I’ve resigned myself to compulsively spraying Liquid Fence Animal Repellent on anything resembling a stick or a leaf. It’s pretty effective, the only downside being that it smells like a week-dead woodchuck covered in Tabasco sauce. And half the time, thanks to a stiff headwind, I end up smelling the same. You get used to it.

But I guess my point is, this is the price I’m willing to pay to peacefully coexist with Nature. Even though, sometimes I’d really like to give it a swift kick in its A-double-squiggle. Figuratively, speaking of course.