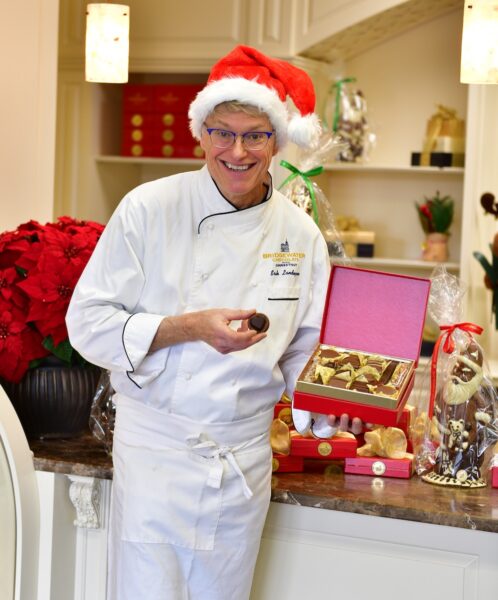 Childhood holiday traditions can live on or fade away. For Erik Landegren, owner and founder of Bridgewater Chocolate, one determined his future.

As a young boy in Sweden, he remembers that “every family had a red-and-white box of Aladdin chocolates on their Christmas table. After a few days, the same five pieces were left in the box.”

The image of those unwanted sweets stayed with him. Decades later, when Bridgewater Chocolate assembled their assortment box of handmade confections, Landegren wanted “every piece to be loved, eaten, and the box finished.”

His professional life did not begin in chocolate. Chosen as one of three apprentices at The Opera Cellar in Stockholm, he learned how to prepare everything but chocolate. He stayed on with Opera Cellar, a group of restaurants that caters the Nobel Prize gala dinner and royal parties. He then moved to New York as an executive sous chef to open Aquavit, a Nordic restaurant.

Once settled in the States, he joined the ranks of chocoholics, a word new to him. While appreciating the ingenuity and ubiquity of the choices available, from Snickers to Reese’s Peanut Butter Cups, he was a bit disappointed in the chocolate itself.

“I wanted to make a recognizable American confection using European criteria and thought that could be a smashing product. My goal was to create the highest standard chocolate that I could.”

In the early ‘90s, while working as a private chef in Westchester County, he heard about an opening for a chef at the Bridgewater Village Store under the new owner, Peter May.

It was here that Landegren created a chocolate turtle and continued to experiment. “Humidity and temperature affect chocolate. Each day it could turn out different, but I liked the challenge.”

He developed his skill as a chocolatier through classes and seminars. He learned what made the European difference in taste. In the U.S., there is no legislation defining chocolate, while in Europe all chocolate must retain cocoa butter to earn its name. U.S. manufacturers extract cocoa butter to extend their products’ shelf life, which means “it doesn’t melt in trucks during transport nor melt in your mouth,” Landegren explains.

His confections became immediately popular; Bridgewater Chocolate was established in 1995. A quarter century later, the company employs 450 employees, occupies a 10,000-square-foot facility in Brookfield, and owns stores in Brookfield and West Hartford. The holiday season is their busiest, bringing in 60 percent of annual revenue.

Holiday novelties include: Santas, snowmen, a variety of peppermints, Christmas trees, and Hanukkah symbols. 15,000 novelties are prepared for the season. The assortment box stays the same, but the packaging is altered; the traditional blue box is replaced with a red one, still tied up with the gold bow.

Erik attributes the company’s success to the fact that “we developed our recipes based on customer responses.” From the beginning, ties to the community were important. The company has supported hundreds of causes through donations of their one-pound assortment box to “anyone with a good cause” and for years sponsored weekly Scout visits to their facility.

“Nothing could have been done without the incredible support of our customers,” says Landgren.

And the idea for that signature blue hinged box? Also influenced by the Aladdin box, which flipped open. Some traditions leave an indelible imprint.—bridgewaterchocolate.com