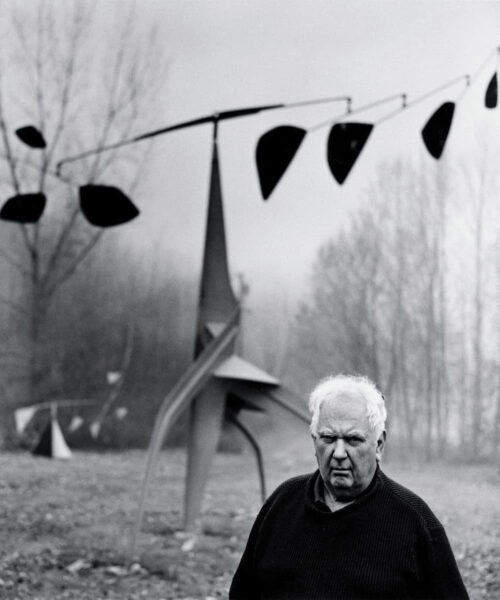 Over the years Litchfield County has attracted many artists, actors, and writers. In particular, the town of Roxbury has had the lion’s share. Most recently, Candace Bushnell, Nan and Gay Talese, Frank McCourt, and Deborah Harry have lived there. But the tradition really goes back to the ‘40s and ‘50s when Arthur Miller with wives Marilyn Monroe and Inge Morath, William and Rose Styron, Richard Widmark, Carol and Walter Matthau, and Alexander Calder took up residence.

Calder was the first to arrive. After living in Paris for many years, he came to America in the summer of 1933 to find a home with a possible studio conversion. He tried Westport, Sandy Hook, and then drove to Roxbury. There he found an 18th century colonial, a burned out barn, and 18 acres of land for $3500. Calder painted the main house flat black and converted the icehouse into a studio for himself. Coincidentally as Calder was establishing himself in his new surroundings, Chick Austin, who rose to fame as the director of the Wadsworth Atheneum Museum of Art, began exhibiting Calder’s work and in1935 bought his first piece for $75. It is still on display.

Calder thrived on making things by hand and small wire sculptures were his first great invention. But he was a contemplative and solitary artist. Throughout his career, which spanned six decades, he worked eight hours a day, never played music, and never had an assistant. By 1936 he was making a number of pieces for the open air, where they reacted to the wind. His work became larger and more expansive.

Susan Braeuer Dam, Director of Research and Publications at the Calder Foundation, explained during a recent lecture at the Litchfield Historical Society that landscape has had a unifying power for artists.

“For Calder, it was the unfolding vistas of Roxbury, where he unleashed his mobiles into the open air, engaging the caprices of nature. The dimensions of Calder’s sculptures responded to the scale of his new environment both in size and sensibility, resulting in objects unruly, untamable, and downright revolutionary.”

As Calder and his wife Louisa settled in Roxbury, others soon followed and there was much socializing. Poet Louis Untermeyer was a resident and playwright Arthur Miller became a neighbor when he built his studio there in 1947. Eight years later he married Marilyn Monroe. By that time Pulitzer Prize-winning novelist William Styron and his wife Rose had discovered the appeal of Northwest Connecticut and became neighbors as well.

“Louis Untermeyer was the first to invite us to dinner,” recalls Rose Styron. “On two occasions he invited Arthur and Marilyn as well, but neither time did they show up—Marilyn always had some problem so we never met her. But when Arthur married Inge Morath we did see more of each other and the Calders were usually there.”

Styron recalls the first time she met Sandy Calder at a crowded dinner table. “Sandy pulled up a stool and sat between myself and another guest. Halfway through dinner he put his head on my shoulder and fell asleep. I didn’t dare move, so I had this white furry head on my shoulder all through dinner. He was charming and funny and he always had pieces of wire with him so he could make things during dinner. He always brought Inge a tool he had made. I envied her kitchen, which was filled with all the tools he had made for her. She also had jewelry that he had designed for her.”

Added to this social mix were actors Richard Widmark and his wife, and Walter and Carol Matthau. Styron described their times together as spirited, intelligent, and fun—especially if Calder was in attendance.

Through it all Calder continued to create whimsical and inventive art that has never been duplicated by anyone else. It has been 45 years since his death, but the Calder Foundation, founded by his grandson Alexander S.C. Rower and the Calder family have been diligent about preserving Calder’s artistic legacy and furthering public knowledge and appreciation for the arts.