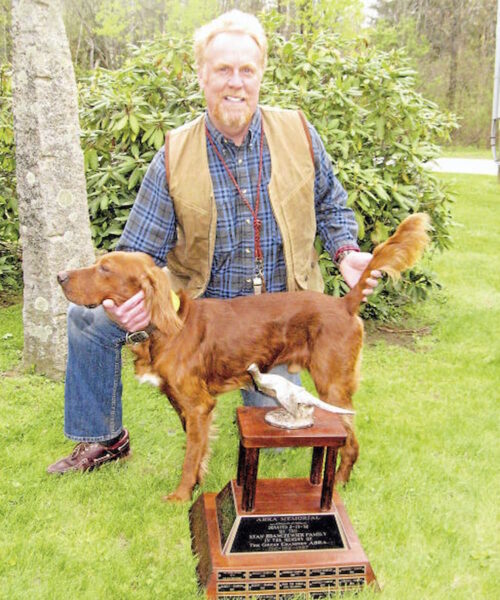 You may have seen a stunning Irish setter striding around Litchfield Center with its owner. “What a gorgeous dog,” you might say. Attractive yes, but that dog, if it is BraeVal Bearcat Laddie, has more than good looks; he’s a champion.

“Laddie” is owned, trained, and handled by Gregor McCluskey, the man behind the BraeVal line of sporting apparel. He moved his retail outlet from Route 202 in Harris Plains to the center of town two years ago. BraeVal Bearcat Laddie is a national champion at finding and pointing birds. He’s been good almost from the start of his career, being voted the New England Field Trial Horse Black Dog of the Year—Puppy. Horses and their riders are often used to track the dogs afield.

Laddie has acquired a number of other titles along the way, including being the National Champion Shooting Dog and RU National Championship Amateur All-Age at the Red Setter National Field Trial Championship. His most recent tour de force occurred in May of 2019 when he won the International Amateur Woodcock Championship held in Rhode Island. He was the first red dog to win the prestigious title.

According to McCluskey, the sport of bird hunting itself is dominated by English pointers and English setters. “Light or white dogs are easier to see in the field or thickets than a red dog,” says McCluskey. “It’s very rare to have an Irish red setter compete and beat the white dogs. The Amateur Woodcock title was his biggest win yet. This was a major event and he was up against some top dogs.”

By definition, a bird dog is a type of “gun dog” or “shooting dog” used to find, hunt or retrieve birds or other small game animals by tracking their scent in the air. The term bird dog refers to dog breeds such as the pointer, English pointers and setters, red (Irish) setters, German shorthair pointers, Brittany, and other pointer breeds. 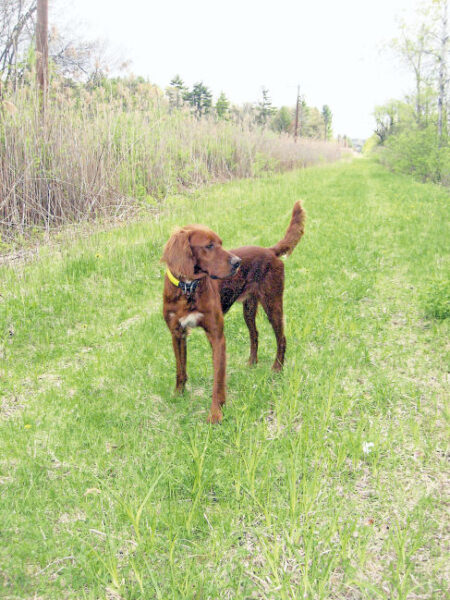 “At the competitions, finding birds is important, but it is not about the number of birds the dog points, but a combination of the class, style and the race—how fast they move to get the job done,” explains McCluskey. “Many times dogs win trials with less finds than other competitors. A dog finding two or three birds is the average (the birds are not shot at competitions) and speed and style points are very important.”

Laddie didn’t come about his greatness by merely liking to run through fields, thickets, and woods. McCluskey has put in hours upon hours training his wonder dog and the eight-year-old canine logs miles on training runs. “He can run fast, with style and grace and points with his tail up in the air in classic 12 o’clock pointer fashion.”

McCluskey says a “class” shooting dog must handle; have a high, fast pace, known as a race; run edges; work on the correct side of the wind; seek out “birdy” objects or structures in the field or woods. When the dog “makes game” it must point with tail and head high, show “staunchness,” and be steady to the “wing and shot.” If another dog has a bird find or point first, the dog must honor and back the pointing dog. He can’t run past the pointing dog.

Last year’s top bird dog events were canceled because of COVID-19, says McCluskey, and the owner/handler is unsure about Laddie’s 2021 schedule. “We’ve been asked to compete in Michigan but I don’t know if we will go. Everything is up in the air.”