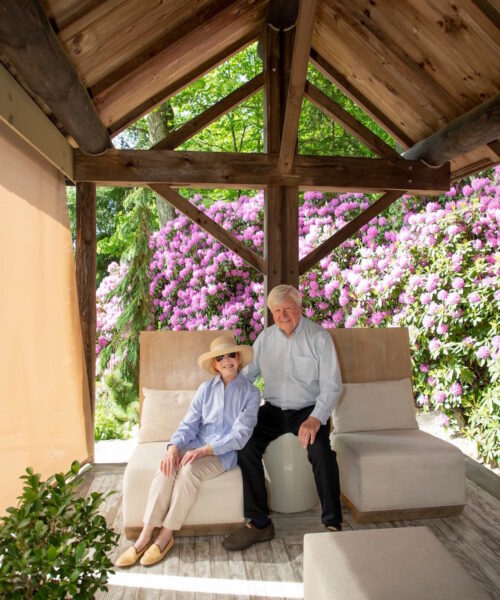 People have many reasons for planting a garden. For Robert Levine, the goal was nothing less than enlightenment.

Robert Levine traces the roots of his Japanese garden back to martial arts. Long before 1986 when he bought his 32-acre Roxbury property with wife Abby, Levine was practicing kung fu, karate, and other martial arts that served as a physical outlet from law school and ultimately legal practice. Granted, he needed a way to let off steam. But really, it was the spiritual connections forged while studying Eastern disciplines that really captivated his inner psyche.

It wasn’t until he retired in 2013 that Levine saw the opportunity to truly embrace his fascination for the physical expression of Japanese culture in his Roxbury domain. He was eating sushi with friend/designer Chris Zaima when they sprouted the idea of creating a Japanese/American garden on his land. Previously, the Levines had installed a handsome pool with plantings flowing around it; they provided immediate maturity and a pithy basis for the plans that Levine and Zaima were dreaming up. “It was the realization of his lifetime,” Zaima recalls of the extended project. As they embarked on the new leg of the journey, Zaima had the design sense and the cultural connections, Levine had the strong spiritual goals, and they added Eugene Reelick of Hollandia Nurseries to the configuration for his horticultural/botanical insights. Together, they were going to turn a landscape into an awakening.

The plan finally came into fruition in 2017 with tons of stone. Above the pool, a ledge of mature 30-year-old rhododendrons formed a backdrop. Zaima united the ledge, a retaining wall, and a pavilion. Then, they proceeded with the extremely focused and carefully positioned placement of stone that is the basis for Buddhist gardens. “Stones capture tranquility,” explains Levine, “boulders symbolize mountains and rugged shorelines. They give perspective. Raked stone represents rippling water and clouds. Together, they tie together and enhance the experience; and they create the illusion of a miniaturized world.” The meticulously placed boulders guide everything from the syncopation of movement around the garden to the delivery of revelations. “You wander the garden with eyes cast down on the stone pathways until you come to a juncture where you stop and behold the aha! moment,” Levine explains. Placing those stones was a focused discipline. “There is nothing haphazard about it,” Levine explains. Similarly, the garden’s rhythm flows. Waterfalls direct water from east to west, plantings swirl in a clockwise motion to channel energy in a course that says “sanctuary.” And it all layers together to whisper symbiosis.

Every plant was carefully selected. Zaima layered shapes together; he balanced symbolism in spaces such as the orchard where a dozen trees represent the 12 months of the year. Rooms open into further rooms. Simultaneously, the color palette is based on greens, but also punctuated by flowering shrubs like azaleas, Japanese maples, rhododendrons, and dogwoods to create seasonal accents. “It has to be balanced,” explains Levine, “it has to have the proper palette but also the right form and texture. The dialogue is unified in harmony.” However, they never strove for perfection, “We want slight asymmetry,” Levine explains. “There is no material perfection; nothing is permanent.” That said, his garden is always a haven.

Has the garden worked its magic? Absolutely. “I go there to meditate. I am centered in the garden and it frees my mind for clarity,” Levine says. Whether he is in the pavilion, overlooking the scene with its waterfalls and free-form dragon stone sculpture, or nestled into one of the many benches in varying rooms, the garden is a path toward deeper submersion. Robert Levine summarizes the experience into three succinct words, “It resonates within.”

Excitingly, Robert Levine’s garden has been chosen as one of the featured segments in the new PBS series “GardenFit.”