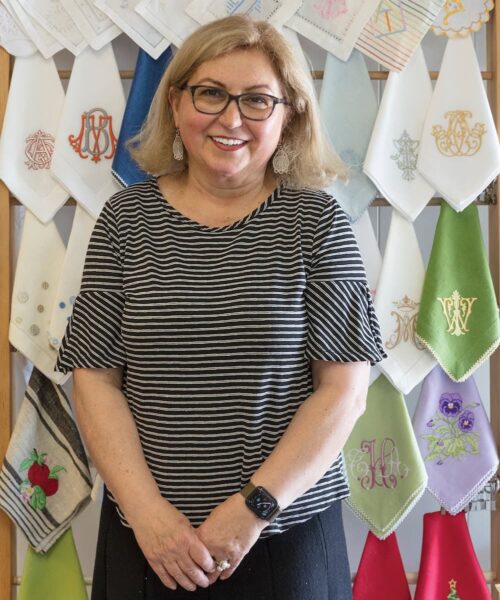 Amy Minasyan was only five or six years old when she became fascinated by fabrics and threads left over from her aunt’s tailoring jobs. The childhood intrigue evolved into a career, and, today, her work decorates spaces ranging from sophisticated dining rooms to private planes and yachts.

Born in Iran, Minasyan spent part of her childhood in Armenia, before immigrating to America where she worked nearly a decade for New York City fashion designers. Eventually, she settled in Connecticut where she launched Best Monogram in 2011. Located in Washington Depot, her store showcases some of her designs, embroidered on almost any kind of textile imaginable.

A monogram artist, Minasyan has completed “many thousands of pieces,” she estimates. The most in-demand items revolve around home decorating, including bedding, bath towels, shower curtains, pillows, and even custom furniture. Table linens are the most popular request, along with baby gifts; she personalizes 80-90 blankets each year.

“It makes everything prettier,” she remarks. “Monogramming makes an ordinary object extraordinary and unique. A thoughtful and one-of-a-kind object and gift.”

The monogramming trend is not new. Having started as early as ancient Greece when rulers put their royal seal on currency, it continued into the Victorian Era when wealth and status were displayed via personalized garments and jewelry. Today, it has achieved artwork levels, becoming a trademark of elegant decor and bespoke gifts for every occasion. Its popularity has been sustained by family traditions, hospitality, and even as a symbol of relationships.

“I can make anything from clothing to draperies,” she explains, detailing the hours it takes to fine tune monograms into digitizing software—spacing every stitch on a computer screen—finding precisely matching threads, then transferring the designs to a monogramming machine, which further takes hours to complete the job. All work is done in house, with Minasyan overseeing all production.

Design requests range from fruit, flowers, and animal motifs, to holiday symbols, and intricate nuptial initials symbolizing intertwining lives and names. Unlike online retailers that may feature only a handful of fonts, with Minasyan the possibilities are unlimited as she creatively “tinkers” with and customizes each project to reflect a clients’ font, fabric, and color preferences.

She does all the monogramming for D. Porthault Paris, a luxury linens retailer, and her attention to detail has captured the interest of Canadian Prime Minister Justin Trudeau, Illinois Gov. JB Pritzker, lifestyle expert Carolyne Roehm, Oprah, Charlotte Moss, the Cincinnati soccer team, and Tommy Hilfiger, among others who choose to remain anonymous.

Minasyan reminisces with pride about the now-all-grown-up customer who still cherishes the baby pillow monogrammed 20 years ago, and the local pear farm owner who has adopted the fruit as a property symbol, embellishing towels and napkins. Word of mouth advertising has attracted clients from San Francisco, to Colorado, Florida, and even Dubai.

“Monogramming never goes out of style,” she notes. “It turns gifts into keepsakes and heirlooms.”