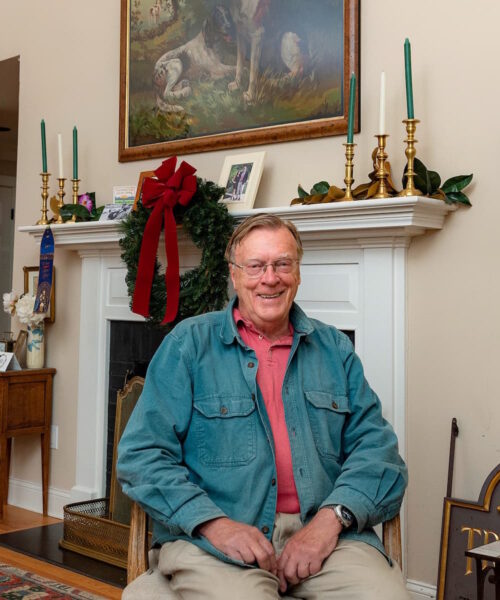 Developing an Eye for Photography in Litchfield

The only remaining photos Tom Holzel has of Camp Wonposet—a place of summer solace on the shores of Bantam Lake that closed in 1997 after a 91-year run—were taken in 1952 with a Kodak Baby Brownie camera he bought for $1.98 at the drugstore on an ordinary outing to Litchfield. Looking back, the innocuous purchase stands out as a gift—more valuable than any festooned with printed paper and bright bows—for through its flip-up frame viewfinder, what would develop into Holzel’s lifelong passion snapped into sharp focus.

Inquire after his favorite claim-to-fame and Holzel will recount how he discovered Margaux Hemingway, swimming in the pool at the Beverly Wilshire Hotel circa 1975, and sent 36 slides to the Ford Modeling Agency—only to find the rising fashion model and actress splashed upon the cover of Vogue magazine the following September (along with a few of his unattributed snapshots inside).

The former Wonposet camper has remained an avid photographer for nearly seven decades. Following a two-year stint as a professional in NYC, a scene he likened to “a vicious racket,” Holzel ceased taking commissions and vowed to become a professional amateur. Even more serendipitous? After making the trek to Morris from Upper Montclair, New Jersey for a half-dozen summers in the 50s, Holzel and his wife Dianne now reside in Litchfield full time. Upon retirement, they scoured the entire Connecticut coast (seeking a spot equidistant to their kids in Greenwich and Boston). One day, while destined for Kent, they passed through Litchfield. Holzel remembers his wife saying, “Hold on, what place is this?” Suffice it to say, they drove no further.

As inveterate hikers, one of the couple’s earliest discoveries was Topsmead State Forest—510 pristine acres gifted to Nutmeggers in 1972 by the late Edith Morton Chase. “We were thrilled by its gardens, and wide tree-lined fields and woods,” says Holzel who naturally began photographing a locale he dubbed “the secret garden of Connecticut” (there were zero street signs pointing the way eight years ago). Holzel ultimately created Friends of Topsmead State Forest where he not only showcased the state of natural beauty found atop of Mrs. Chase’s meadow, but also garnered hundreds of followers who—if only from a distance—enjoyed the residual gifts of Holzel’s picture-taking expeditions at Buell Road.

“I am an innovator, not a worker bee,” says Holzel of the waning thrill he found publishing yet another image of a monarch butterfly, clinging picturesquely to the side of some colorful bloom. While he’s passed the official baton—selling the site to Jenny Riggs who, along with a burgeoning group of Topsmead aficionados, turned it into a 501c3 operation—Holzel remains drawn to Topsmead. “The mostly wide-open fields are really glorious,” he says of the popular spot for dog walkers and cross-country skiers once the snow flies.

Holzel’s artistic eye has developed along the way; today, composition—the arrangement of things in a way that strikes the eye as interesting—is his primary focus. Memories of bygone days, like The Hurricane of 1955 (when he was a 14-year-old camper at Wonposet), loom large. “We woke up, eyes hardly open, and stepped out into water,” he remembers of the morning after Bantam Lake rose more than ten feet to the base of the sturdily-constructed platform tents. “We were astonished!” Holzel recalls, before the fun of getting into canoes and paddling about camp to wake the others ensued. “It was an unforgettable experience!” he reiterated—one that, 66 years later, has come full circle (as evidenced by eight 4 x 6 prints which, for the bargain price of fewer than two bucks, were included in the price of Holzel’s first camera). All of which he still has.