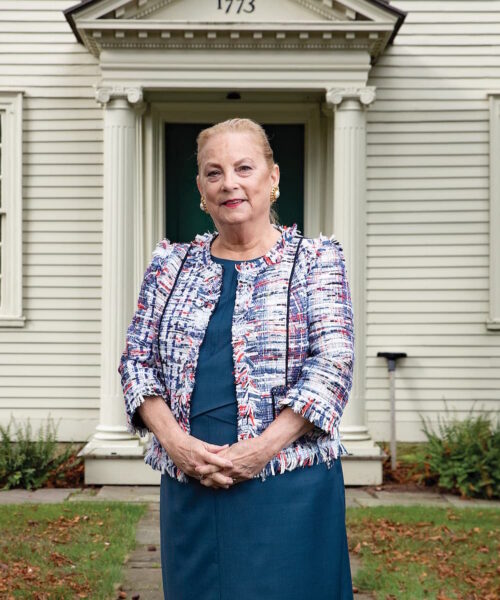 Anne Dranginis Paved the Way for Women in Law

Anne Dranginis has set the standard for women in the field of law and is recognized as a leader in the legal community. Recipient of numerous awards, she was the first female to serve as the Assistant State’s Attorney of Connecticut, was appointed to the Connecticut Superior Court in 1985, and in 2000 was appointed to the Appellate Court, serving a total of 20 years. Now in private practice, Dranginis specializes in family law. Throughout her stellar career, two things have remained constant—her passion for law and her love for Litchfield, where she has spent her entire life.

“I grew up in Goshen,” says Dranginis, “on Beach Street, just a few steps over the town line. My mother was a teacher in Litchfield, who maintained that Judges Andrew Roraback and Hope Seeley were her star pupils, even though she taught me as well. My parents were politically involved and I was interested in politics and loved political cartoons. I thought I might go on to medical school and got a scholarship to Manhattanville College. Then I had to tackle calculus and the counselors suggested I might be better in a verbal field. I went on to graduate from the University of Connecticut School of Law.

“It was a state school and I had no desire to leave home at that time. I was on the rules committee for the Democratic Party and I stayed involved in state politics.”

At the time Dranginis got her law degree, there were firms who didn’t want to hire women. Determined, she made a cold call to Lew Rome, an attorney and politician who served in the Connecticut State Senate. She got the job. It was merely a stepping-stone to an amazing career.

Dranginis practiced law with the firm of Rome and Case until 1977 when she became the first woman Assistant State’s Attorney for the Connecticut Superior Court. She set the bar high and her success has opened doors for other women to enter the legal field. She has a keen interest in the administration of justice and in improving the system. Following her years on the bench, she is now practicing family law at Pullman & Comley.

“I think I have been so fortunate. I’ve been given opportunities to learn and where I can make a difference.”

Dranginis is admired by all who know her, from her huge circle of friends to her colleagues.

“I have had a very unique experience with Judge Dranginis,” says Campbell Barrett, a lawyer at Pullman & Comley. “I appeared before her when she was a judge, have argued cases against her when she worked at her prior firm, and now have the pleasure of being her colleague. She is a one of a kind legend.”

While Dranginis has thrived in her professional life, her personal life has had its share of sadness. In 2016 her husband Billy Jacobs died after a second bout of cancer.

“He made me laugh all the time,” she recalls. Two days after he died I went to the courthouse to pick up a decision. Working was my normal; I wouldn’t know what to do if I didn’t work.”

“I was angry at the choices she’d made, she had so much promise. I had mourned Charlotte for so long and had played the scene over and over for years. I don’t give myself time to react to the enormity that has been handed to me. You have to keep going. Every day is normal until it’s not.”

And while it is impossible to forget, Dranginis has a coterie of friends and loves to entertain. She and her sister Mary recently moved into a new house in Torrington, where one can rest assured there will be much holiday cheer.