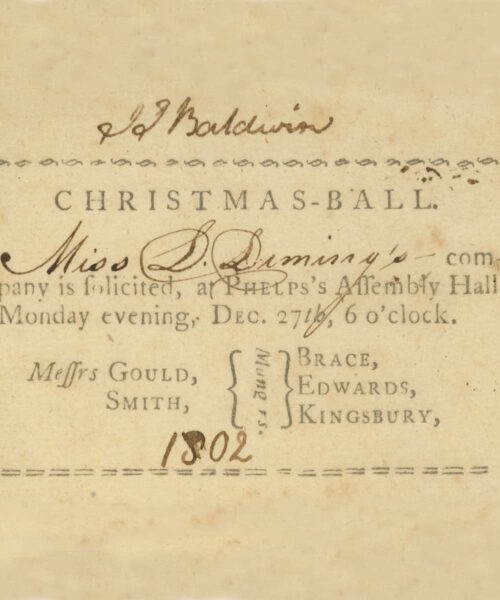 It’s that time again, when shopping, baking, and planning celebratory festivities begin to take over the final months of the year! We recently discovered Dorothy Deming’s invitation to a Christmas Ball at Phelps Tavern in 1802. The Phelps Tavern once stood on East Street in Litchfield, next to the Congregational Church, and was known to hold student balls and holiday celebrations in their top floor ballroom. We couldn’t help imagining yuletide celebrations from 200 years ago. There were likely stolen kisses under a “kissing ball” made of boxwoods, hot wassail (roasted crab apple) punch, or dancing the Minuet. A gun firing squad may have even marked the occasion! We learned that George Washington was a fan of eggnog, so we imagine that it would have been served to some during this time. Though menus would have varied with income levels, a feast of roast goose, clam soup, and hickory nut macaroons would have been found on tables in town. Many of the holiday traditions enjoyed today were not introduced until later in the 17th century. Christmas trees wouldn’t have been in homes (introduced as a tradition from Germany) until decades later. Surely Dorothy Deming, of the well known Deming Family who lived on North Street in Litchfield, would have enjoyed her evening celebrating the holidays at the Phelps Tavern. Which cherished traditions are part of your holiday celebrations?