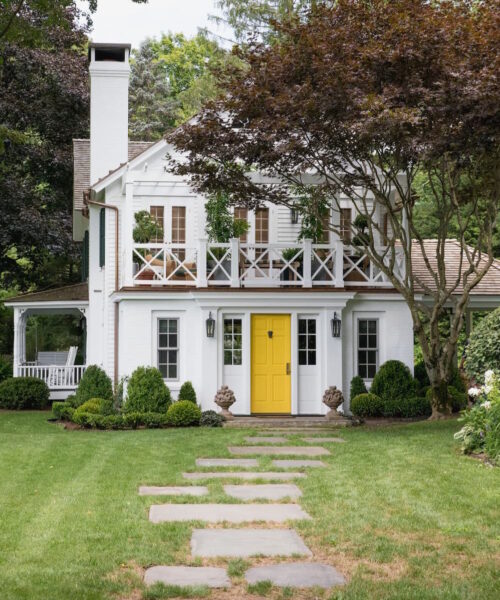 The moment Mark Drendel finesses a space in his Roxbury garden, he sees another project in the distance.

Mark Drendel and Chad Conway’s wish list was fairly modest when they went looking for a home in Litchfield County. Immediately after their son Nicholas was born, the couple discovered a need for “a new lifestyle” and the search began. Basically, they just wanted a house where you could hear the screen door slam from the yard. So a yard was definitely in the picture. But beyond a little space for their toddler’s kiddie pool, there was no agenda. “I think we bought the cheapest house in Roxbury,” declares Drendel—owner of Canine Styles in New York City and Roxbury resident since 2003.

The house they found was undeniably modest. The 1920 Sears kit house was definitely not flashy, but they fell in love with the front porch—and the requisite screen door. Sitting on an acre of land, hearing that door slam from all points wasn’t an issue. Plus, beyond their fondest dreams, the house boasts direct views of farm fields—now donated to the Land Trust and cultivated for crops and hay. “We can wave to the farmers on their tractors,” Drendel enthuses.

Although their adopted house was modest, initial indoor renovations were limited to providing additional play space for Nicholas. Outdoors was a whole different story. They had already added shutters and improved on the paint hue, “We figured the previous owners bought into a special on beige paint—everything inside and outside was that same drab color.” They found themselves using the outdoors as additional room for their little family, but the scene was severely basic until a vacation spent on an estate in Provence gave a glimpse at what gardens could do for a property. They came home with a newfound urge to enhance their little parcel.

When Mark Drendel is ignited by an idea, he embraces it fully. Not only did he take inspiration from other landscapes in the Litchfield region, he also expanded his vistas through books. Tracey Young of The Elemental Garden in Woodbury gave him his first copy of Russell Page’s The Education of a Gardener and he was sufficiently captivated to swing into the initial design with Young. Drendel sent her photos of scenes he found alluring—like a dogwood hillside and rose gardens tripping down slopes, and she purchased the ingredients. Pretty soon, trucks were arriving with trees and shrubs by the dozen and Drendel was juggling mind boggling quantities of plants. That’s when David Bergman of DWB Botanical Designs was called in to help implement the vision. Bergman has been a critical facet of the picture ever since.

One characteristic of the landscape predominated, limited, and directed all the plantings. The Roxbury acre that Drendel and Bergman are tackling inhabits one of the steepest hillsides in town. High up on the want list was a pool for family recreation. Finding a way to wedge a water feature into the land was an engineering feat that required serious terracing and bolstering with stone walls. But the exercise simultaneously opened the opportunity for further lounging and dining areas to utilize the levels. Meanwhile, Drendel had discovered a love for clipped boxwood, his unique approach being to create wonderful undulating edging around floriferous rose and perennial gardens. What resulted is a sumptuous fusion of formal and floral that satisfies all sides of his personality. Hydrangeas also play a key role in making Nirvana happen.

“Now, it’s a garden with a full span through the seasons,” says Drendel of his collaboration with David Bergman. Meanwhile, renovations include a new dining room, house additions aloft, and an outdoor pergola/lounging area. Entertaining has become a primary function. Interestingly, Drendel takes moments spent sharing his landscape with friends as jumping off points for further projects. “When I sit and look around, I see a new sight line which leads to the next sight line. It’s constantly evolving,” Drendel remarks.