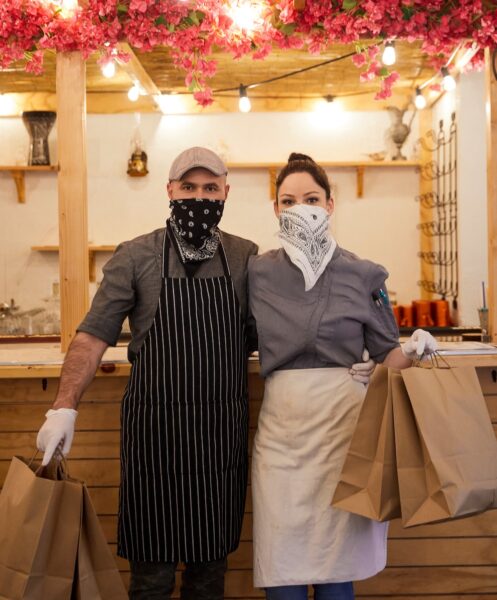 Anything but business as usual.

When Covid-19 swept in, restaurants closed to crowds for the first time since anyone could remember. They could, however, keep their kitchens functioning to feed us. Venturing out for curbside pickup became something of a special mission—a permission slip to tiptoe off property. What pining restaurant regulars and fed up home cooks came to see as a glorious night off, was however, a tightrope act for many restaurateurs. From the moment the Connecticut governor issued closures, owners set about scrambling to survive.

“I knew it was coming, but I was expecting another week or two,” recalls Kaitlyn Gogo, of Yia Yia’s Greek Kitchen in Torrington (pictured), “I was having a talk with staff when I looked at my phone and I saw it…and I was like, oh my God.”

“That really didn’t give anyone enough time to properly prepare for it,” says Gogo, whose importer had just delivered her a fridge full of food that morning. Gogo and her husband, Yanni Gogo, had only been in business for nine months—the critical first year—and had just started turning the wheels of success.

Down the road at Bohemian Pizza in Litchfield, Mondays are typically busy nights. Co-owner Jason MacKenzie wasn’t prepared either, “It was kind of shocking for us for sure. We ended up having a pretty good crowd. It was kind of like a last hurrah for table service.”

Then it was on to harsh realities. Laying off waitstaff and bartenders. Trying to source food distributors still making deliveries. Working out contingency plans with landlords and banks.  Adjusting entire business models to become curbside pickup only.

Yia Yia’s tried it for the first few days, but couldn’t move the food they had on hand fast enough. They begrudgingly decided to shut their brand-new doors until they could regroup, donating the ingredients in their kitchen to the local food pantry.

At Community Table in Washington, they spent the better part of three days beefing up their rarely used online ordering system.

“There were orders as soon as we were online. It was hysterical,” says Joann Makovitzky, Community Table’s managing partner. “Everyone was more concerned about us having financial hardships, so they supported us to make sure we wouldn’t close.”

Restaurants without a captive audience had to keep hustling, on top of evolving with the situation—six foot-distancing, mask mandates, and the ever-changing projected ‘end’ of the crisis. One of the keys to communicating on the fly became social media, where the restaurants’ flavors came out. Bohemian crossed zany humor with more serious matters like praising staff for updating their food safety practices during unemployment; Yia Yia’s balanced pertinent business updates (including its scaled-back reopening), with the occasional arresting photograph of the Mediterranean. 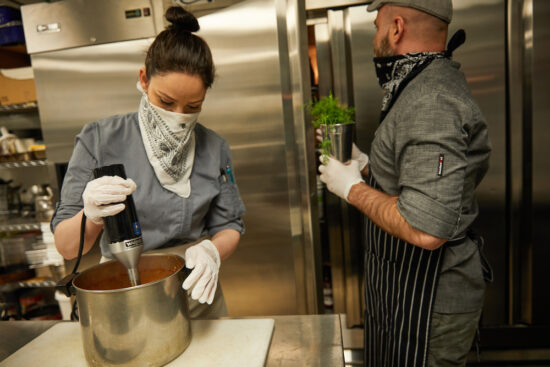 “I thought at least maybe once a day if you see something that just takes your breath away and makes you think about something else…it will make you feel better, even just for a minute,” says Kaitlyn Gogo.

If laughter or beauty couldn’t lift spirits, tales about the circular stream of community support could. Community Table and Bohemian Pizza both attested to Litchfield Distillery dropping off free hand sanitizer when it mattered. While closed, Yia Yia’s received daily messages from customers telling them how deeply they were missed. Bohemian’s Rene MacKenzie marveled at Bantam Tileworks and Sportsmen’s unified effort to get masks for her staff, “We have some really really great small businesses up here. Not just in this town, but our whole county came together.”