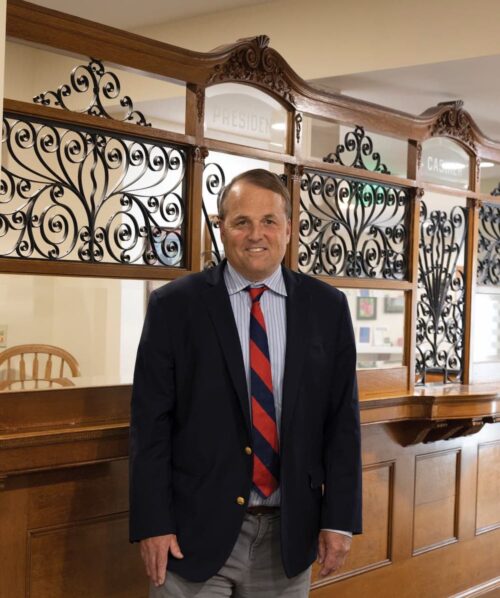 Step into the lobby of the Salisbury headquarters of National Iron Bank and you’ll see a modern bank with historic touches: an old wall clock from the original bank building in Falls Village and a mural representing iron workers. Take a few steps further into the back office, and you’ll enter history, all the way to 1847 when the bank was founded.

The first teller counter, moved from the Falls Village office, fills one wall. Its bow-front counter is topped by two windows—one each for the cashier and the president—covered in scrolled wrought iron. Next to it sits the original vault door; on the wall behind it hang framed exhibits of the silver currency print plates and currency sheets. Security consisted of a guard dog and a gun in the drawer.

Iron Bank took its name and its logo—Iron Works—from the community it served when it opened 175 years ago with $193,000 in assets. Today, there is little evidence of a thriving iron industry in the northwest corner but beginning in the late 1700s and continuing into the early 1900s, ten towns from Canaan to Washington along the Housatonic River were home to iron mining pits; the area was known as Iron Country. The Ore Hill Mine in Salisbury, with three mining pits, was the greatest of these, known worldwide for the quality of the iron cast in its furnaces.

Back then, banks produced their own currency. Transparent, tissue-paper sheets showing the stamp of the iron worker were burned in a pot-belly stove at the quarterly board of director meetings; the currency had to be destroyed before fresh bills could be printed. At the end of the Civil War in 1865, President Lincoln created a federal currency and all banks ceased printing their own bills. Iron Bank then became National Iron Bank (NIB).

From the start, the bank has taken its role in the community seriously. “Community banks are important all over the country,” says Steven Cornell, CEO and President. “And it’s always about relationships. We live in our community, and we want our local businesses to thrive.” The bank services Litchfield County through four branches and two loan offices.

During the pandemic lockdown, NIB did not close. “The employees wanted to be here,” Cornell says. “Many of the bigger banks didn’t want to deal with the PPP (Paycheck Protection Program) loans. People were desperate; their businesses needed that money to survive.” The bank wrote personal letters to every business in the area to “make sure they knew they could come to us, and that we’d do it quickly—as fast as we could with the changing rules.” NIB administered $20 million in PPP loans.

What does the future hold for the oldest private bank in New England? In the short-term, a series of 175th anniversary celebrations throughout the county; in the long-term, a new state-of-the-art office in Litchfield, and a consideration of cryptocurrency.

National Iron Bank, with current assets of $250 million, has weathered wars, recessions, depressions, and economic panics by adapting to change while maintaining its values and living up to its logo: Iron Works. —ironbank.com