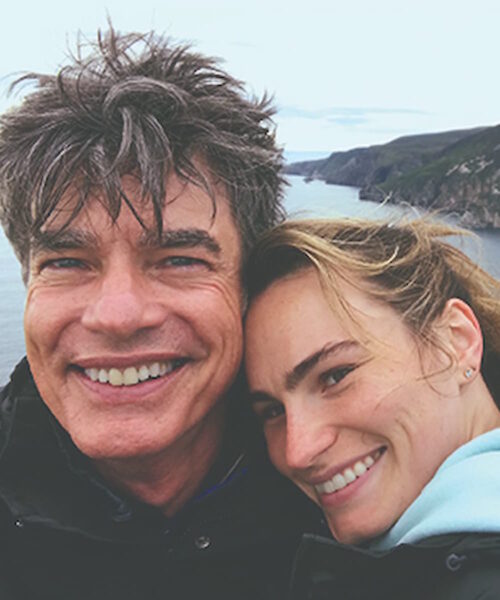 Kathryn Gallagher knew from an early age she wanted to be a singer-songwriter.

“I can’t remember a time in my life when I didn’t want to be one,” she says. “When I was little we’d be driving somewhere and my mom would say ‘Okay Kathryn, write a song about a bus.’ And I would. I didn’t start writing songs with a guitar until I was in second grade.”

But what can one expect from the daughter of Peter Gallagher, award-winning star of stage, screen, and television. Her mother Paula Harwood is the daughter of a famous Broadway dancer, and her brother Jamie is a writer and director. Show business runs in the family.

When Gallagher was in the television series “The O.C.” the family was living in Los Angeles and Kathryn announced that she was booked for a gig at Whisky a Go Go. Her father thought it was a joke and humored her until the phone rang and it was someone from the club asking if she had parental permission to perform since she was only 15. It’s the last time he ever doubted her.

“That was the beginning of a period of abject terror for me,” recalls Peter. “I didn’t want my little girl exposed to be hit on. It’s both exciting and nerve-racking to watch your kids find their way in the world. It’s important to feel authentic in your craft and the only way to do that is to put in the hours.”

Kathryn has been working ever since, successfully writing and recording her own music. While much of her music is sad, it tells a story and heals the heart. And when she sets her mind to something it usually happens. Case in point: “Jagged Little Pill.”

“I have been a fan of Alanis Morissette since I was a little kid and my mom was blasting her music throughout the house. In 2013 when it was announced that they were developing a stage musical based on that album, I wrote to my parents and said I need to do this.”

After several callbacks she got the role of Bella, which had been expanded. In 2019 the show opened on Broadway. Kathryn’s performance was called a standout and she was nominated for a Tony Award. Ironically she received the nomination performing in the Broadhurst Theater—the same theater where Peter won his first Tony nomination for his role in “Long Day’s Journey into Night.” The Playbills sit side by side in their home.

The pandemic has given Kathryn time to work on her music and Peter is off to film a new series. But both look forward to family time at their home in New Milford.

“Our family is like a little space pad,” says Peter. “It’s always been just the four of us through thick and thin. At this point my kids know so much more than I do. And the only thing better than succeeding yourself is seeing your children succeed.”