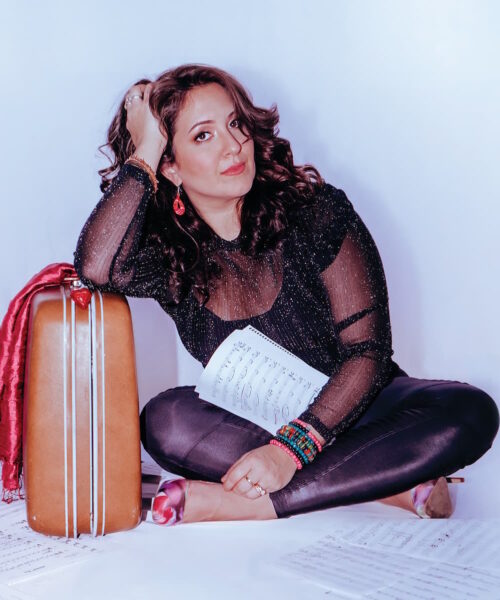 Litchfield native Nicole Zuraitis evokes the days of female vocalists who ruled the world of cabaret. Reminiscent of Margaret Whiting, Rosemary Clooney, Peggy Lee, and Anita O’Day she has, as she herself describes it “a big voice.” And she puts it to good use. Since 2008, when she did her first gig at the Litchfield Jazz Festival, Zuraitis has established herself as a talent to be reckoned with and one of the stars of the modern cabaret world. She has gone on to play at staples of the New York City jazz scene like the iconic Birdland and Bar 55, as well as other venues here and abroad.

Although the pandemic changed many of her plans, Zuraitis has been busy thinking of new ways to promote her work and reaching the goals she has set for herself. Alongside her is renowned drummer and bandleader Dan Pugach, who she married in 2017. They were both nominated for a Grammy in 2018 for Best Arrangement, Instruments and Vocals. Last year they created the Virtual Piano Lounge to compensate for missed live performances.

“It was really a necessity during COVID,” says Zuraitis. “We lost all of our tour dates and there were no cancellation fees. So we had to figure out a way to get some income. Virtual Piano Lounge is an interactive live-stream concert with me doing the vocals and playing the piano and Dan on the drums. It incorporates live requests from viewers. We then expanded it to provide entertainment for virtual conferences, concerts, and a variety of events.”

Recently Zuraitis won the Gold Medal and Ben Tucker Jazz Award in the 2021 American Traditions Vocal Competition. Sponsored by the ATC Corporation, located in Savannah, Georgia, it is the premier competition and the only one of its kind. Its mission is to foster and preserve traditions of musical expression that have become significant in American culture.

There are three rounds and contestants are required to perform diverse songs written by American composers. The winner receives a generous stipend as part of the award. Zuraitis put hers to good use.

“I decided to get my MBA,” explains Zuraitis. “I felt that my brain was shrinking and I wanted to move beyond music. So I am getting my Master’s in entrepreneurship. I’m doing it online and I can double up on classes and should be done in December.”

Meanwhile as life returns to some kind of normality, Zuraitis is booking appearances and writing new songs. She has produced several albums of her original music, including “All Wandering Hearts” and her newest single “Father Figure.” She is working on completing a big band album and hoping to expand her licensing opportunities. Additionally she will be performing with the Savannah Philharmonic in their upcoming season. Never one to rest on her laurels, she is eager for the next challenge as she continues to establish herself as one of the most important female  jazz singers of her generation.