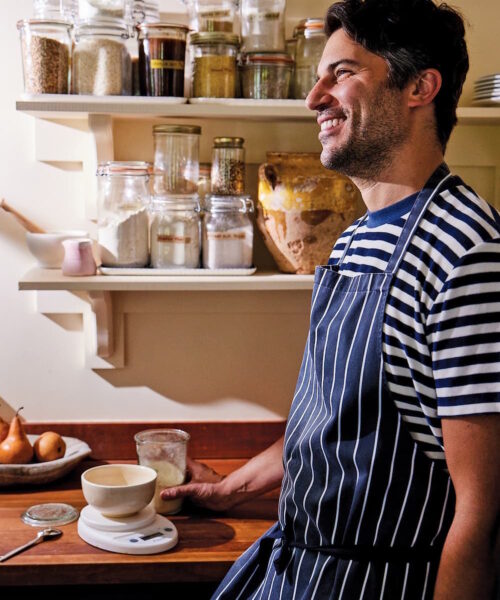 In the staggeringly competitive world of cookbook publishing—there were more than 21 million printed in the U.S. alone in 2020, according to the New York Times—you need more than good recipes (and a little bit of luck) to stand out. You need something else, some kind of gimmick or hook to appeal to the ever-growing legion of home cooks. For some it is name recognition—think Ina Garten or Daniel Boulud. For others it is a unique approach to food that may not have been previously explored. That is the route that Brian Levy has taken with the publication of his first cookbook, Good & Sweet.

Difficult as it might be to conceive of a method of cooking that hasn’t yet been trapped between a dust jacket—sous vide, Afro-Kosher, cannabis, plant-based meats, et. al.—Levy has had a remarkably smart and simple idea: Making desserts and baked goods without sugar.

Impossible, you say? Isn’t the whole point of these foods to provide us with a sugary high? No one gobbles down a glazed cruller for its health-giving properties, after all. Not so fast, says Levy. “You can still get the sweetness you crave. You just don’t need to use sugars to do it.”

He does it by choosing sweet alternative ingredients to more traditional products like refined sugar, honey, agave, and even maple syrup. “When you bite into a mango, you get this incredible natural sweetness, right? But it’s all contained in the fruit itself. You don’t need to add anything else to make it sweet. It not only tastes great, it’s also better for you.”

To achieve his sweetness goals he focuses on natural substitutes, such as fresh, juiced, and dried fruits, as well as freeze-dried corn, apple cider, coconut cream, and even miso paste. “It took me years to come up with the right ingredients. There was a lot of experimentation. I even used it as the basis for some of my food recipes that my mother made in the ‘70s.”

The results speak for themselves. Readers can find recipes for such goodies as Sticky Toffee Pudding, Chestnut Ricotta Ice Cream, Granola, and a Black and White Milkshake.

Levy is more than just a weekend dabbler. He spent years as a pastry chef at Babbo, where he was mentored by James Beard Award-winner Gina DePalma. “I wasn’t a big baker as a child,” he admits. “I did have a sweet tooth but I fell into cooking by accident. After I graduated from college I tried to get a job at Gourmet magazine. So I thought that maybe if I got a kitchen internship that would help my chances. I landed an unpaid gig at Babbo. After a couple of months one of the girls left and I was hired full-time.”

After that he worked as a private chef in Spain and France, and toyed with the idea of turning his recipes into a book. Then, during Covid, he got the opportunity. Now his book is coming out from Penguin Random House on July 22. That’s pretty sweet.