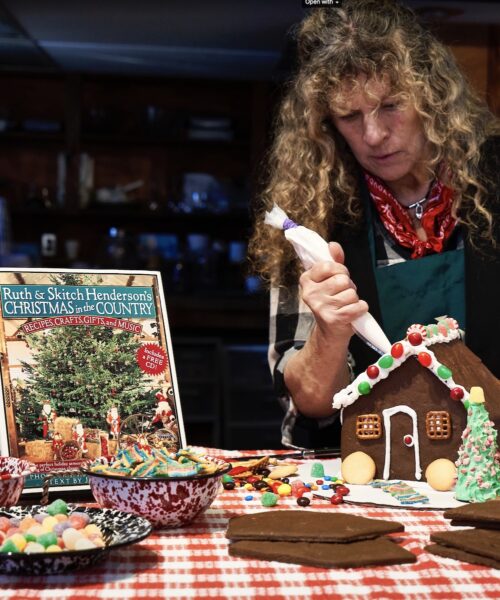 Gingerbread Workshops at the Silo

Of all the countless Christmas traditions, few are as family-interactive, creative, aromatic, and tasty as making your own gingerbread houses.

This Thanksgiving weekend at The Silo at Hunt Hill Farm in New Milford, which celebrates its 50th anniversary this year, you can sign up for a class with local legend Nancy Stuart, head of The Silo Cooking School, and decorate a pre-constructed gingerbread house with “a crazy assortment of tons of candy” and vanilla icing, Stuart says. Walk into the warm, rustic, creaky barn with a 22-foot-tall Christmas tree, and your senses are infused with the spirit of the season.

“Even though I make the houses ahead of time, I make sure to have fresh sheets of gingerbread cooking in the oven when people show up, so they get the full aroma,” Stuart says. “Then, they can cut out gingerbread people or make additions to their house with it.”

Prepping for gingerbread season is year-round, Stuart says. “I’m constantly hitting up the stores for buy-one-get-one-free candy. The store clerks must think I’m a candy addict.” Bowls are set before guests, full of gum drops, M&M’s, candy canes, Hershey kisses, peppermint bark, Fruit Loops, Kit Kat bars, Smarties, Necco wafers, Snow Caps, pretzels, Lifesavers, licorice, raisins, coconut flakes, shredded wheat, “I mean, it’s endless,” she says. The houses can be as wild and whimsical, or tightly-engineered as the creator desires. “Some people like to have it all symmetrical and purposeful; others go crazy and put stuff everywhere.”

The gingerbread tradition at The Silo began with the late Ruth Henderson, a native of Germany, where gingerbread originated in the 16th century. Henderson and her late husband, Skitch Henderson, founder of The New York Pops, opened The Silo in 1972, and “the place quickly became the Valhalla for Christmas lovers,” says Alessandro Piovezahn, chairman of the board of directors for the Hunt Hill Farm Trust, Inc., which oversees The Silo.

“We want to keep the Henderson’s magical love of Christmas alive, and that’s what we’re doing, especially now that we have the gingerbread queen, Nancy Stuart, back,” Piovezahn says, watching the chef bustle around the kitchen of the prestigious cooking school that has drawn denizens of celebrity chefs to teach classes through the years, including Martha Stewart and Jacques Pepin.

Stuart, a Bridgewater native, started working at The Silo in 1988, but left five years ago during transitional times with management. “It took me 16 months to convince her to come back,” says Piovezahn, “and here she is. Just look at that sparkle in her eye, that expression of pure joy! She completely embodies Ruth’s enchanted spirit.”

The playful, sassy Stuart tells Piovezahn to “be quiet and get back to work.”

The gingerbread classes are scheduled for Thanksgiving weekend, November 25, 26 and 27, from 1 to 4 pm. Children and adults are welcome. It is suggested that guests team up in two’s, rather than have large groups working on one house. The cost is $100 per house. To register