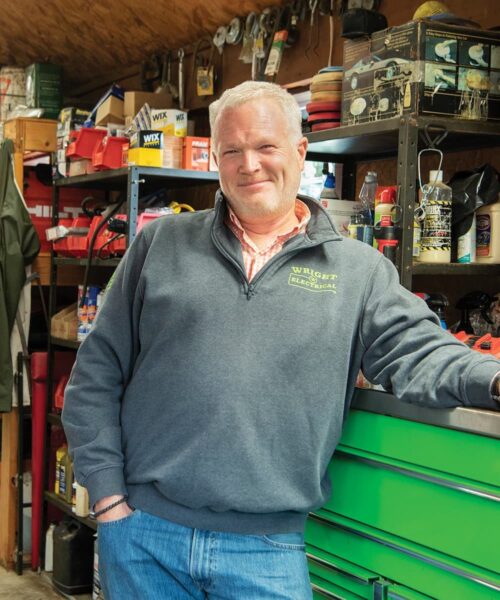 Get the Wright Electric

What unraveled in Washington Depot some 50 years ago is a true story of light coming out of darkness.

“My father, Harry Wright, grew up an orphan in a New Preston shack with a dirt floor and no windows and bounced between foster homes,” Darryl Wright reminisces. “Kind individuals in town helped him pick a trade and he became a union electrician in the 1960s.”

In the 1970s, Harry “broke a piggy bank,” removed all $800, and with support from his wife, high school sweetheart Darby, took a chance on establishing his own company: Wright Electrical. The risk paid off and the company flourished.

“He is literally a ‘rags to riches’ story,” reflects Darryl, who joined the family business after graduating high school in 1984.

For decades, Wright Electric has come to the rescue in many ways, from restoring power following storms, to installing generators, replacing panels and lighting systems, and servicing  swimming pool wiring.

Recently, the company has responded to the increasingly popular trend of smart homes. Remotely-controlled features are becoming standard among new luxury construction, but can easily be incorporated when remodeling or just updating appliances, Wright explains. Ranging from smart thermostats, to refrigerators, garage door openers, and even water leak detection, such technology has become less expensive, more convenient, and offers opportunities to conserve energy and interact with a home.

Whether building or remodeling, electricity should not be an afterthought and everyone should consider future infrastructure needs and “not just wire for 2022,” he advises.

“Don’t start building until there is a strategic plan in place,” Wright cautions. “Bring the electrician in early into discussions with architects, to mitigate with the design team when you’re deciding the chandelier over the kitchen island or where the art wall goes. It’s an intricate process and it is cost-saving to stay ahead of the game.”

“It gives you a warm feeling knowing that it was in your power to help someone and hopefully, someday someone will be there who can help you,” he states. “I’m trying to instill in my sons the importance of giving back.”

Wright beams with pride at having raised three boys: Luke, the oldest, pursued another career, while Jack, and Owen, the youngest, work alongside him. He fervently credits his wife Donna, an art teacher in Region 12, with “holding down things at home” and caring for their children especially while they were young, while he tended to town responsibilities, serving on various boards, and helping at charity events. Further following in his father’s footsteps, he joined the Washington Volunteer Fire Department, serving 17 years as an officer and three as chief.

“Watching my parents’ struggle to succeed is what drove me, but I also really enjoy helping people,” he explains.

The next time you call Darryl Wright and his crew, know that the person brightening your day is someone deeply wired in the community. —wrightelectric.com