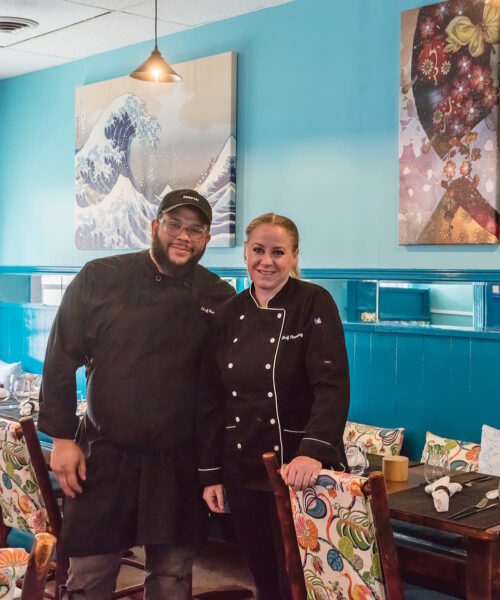 For almost two years people driving down Route 47 in Washington wondered what was happening in the old Hidden Valley Eatery space. Was there a new restaurant going in? When a sign finally went up announcing the arrival of “Flemming’s Hidden Valley Restaurant” a collective cheer went up. Residents of Litchfield County are lucky to be home to some really excellent restaurants and now we have a new one.

“I would describe my food as American with an Asian flair,” says executive chef and owner Flemming Brown. “I have lived all over Asia—Singapore, Malaysia, Indonesia and Japan—and that’s influenced how I cook. If you order the braised beef rib it looks traditional but it comes with a soy demi-glaze and wasabi whipped potatoes that gives it an extra twist.”

A native of New York City, Flemming’s family has a weekend home in Roxbury and she grew up coming to the area. She developed her love for cooking early on from her mother Lisa, who is now helping out at the restaurant. Like so many New Yorkers she moved out of the city at the beginning of COVID and decided to stay put. “I had been running a successful catering business but the pandemic just flattened it. I had always wanted my own restaurant. When the old Hidden Valley space opened up, I went for it…”

Sourcing her ingredients from a number of local farms, Flemming has put together an eclectic menu that reflects her culinary influences. Her vision is to have more casual food at lunch and then elegant dining at night. Highlights from the dinner menu include her soy-braised beef sushi roll with wasabi aioli, panko-crusted Chicken Katsu with a lemongrass glaze, and a three-cheese white pizza with her house-made bacon jam. A word about the bacon jam. It is, just like it sounds, absolutely delicious and completely addictive. She also uses it as an appetizer paired with Boursin cheese and, at lunch, on a seriously good hamburger, made with local beef and also topped with Swiss cheese, garlic aioli, tomato and arugula, served with her signature parmesan and parsley fries. Welcome to the neighborhood, Flemming!