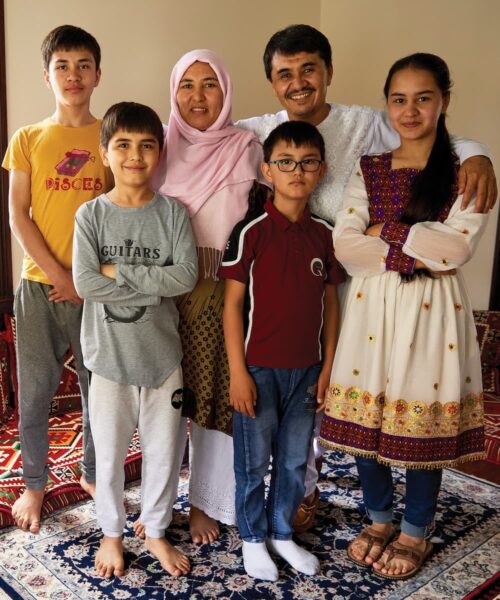 Alibaba Awrang greets me at the door of his new home with a big smile, wearing a traditional Afghan embroidered shirt. As I step inside, following tradition, I remove my shoes. I was told that food would be served—an understatement to say the least. The floor of the living room is covered in a colorful Afghan rug and on it is spread a sumptuous feast of traditional Afghan dishes, all prepared by Awrang’s wife Gul Ziwar.

The Awrang family includes Alibaba, his wife, and their four children: Arman,15; Arezo,14; Ali,12; and Taha,10. Their road to America and safety has not been an easy one. The Awrang’s were evacuated from Kabul, Afghanistan, in August 2021, as part of the 95,000-person migration orchestrated by the United States. They spent six months at an American army base in Qatar, another month at a safe haven in Virginia, finally arriving in New Milford and their new home at the end of March.

As refugees have continued to arrive—Connecticut is expected to welcome more than 500—finding suitable housing and schooling and employment have become a challenge. In an effort to help facilitate these, a group of concerned citizens in Washington, CT have formed the Washington Refugee Resettlement Project (WRRP) in collaboration with the New Milford Refugee Resettlement. Both groups are working in conjunction with the Integrated Refugee and Immigrant Services (IRIS) in New Haven.

“Community sponsors play an integral role in helping refugees get off to a strong start in their new home country and eventually to become self-sufficient,” says Carolyn Setlow, WRRP Senior Advisor, Communications. “We have over 50 volunteers who are dedicated to every aspect of resettling the family we are sponsoring. As it turns out Alibaba Awrang is a highly respected artist in Afghanistan and we are working hard to reestablish him in his chosen field now that he lives here.”

Awrang is indeed a talented artist, who defines his work as calligraphy, but it does not resemble the art form we know in this country. It is a combination of hues and lines and is created with different colors of ink. Because his work is well revered in his homeland he has had a number of shows in Afghanistan, Pakistan, Iran, and Bahrain.

“I taught in Tehran and in Afghanistan for more than 20 years,” explains Awrang, who is becoming fluent in English. “I was head of the department of calligraphy.”

Although he had a treasure trove of his art in his homeland, he was only able to take a few pieces with him. But he has already been back at his easel doing what he loves most. Martha Bernstein and Mary Davis, who run the employment program for WRRP, are reaching out in many directions to get Awrang connected to a gallery.

Meanwhile his four children have been attending public school and have settled nicely into making new friends. Gul Ziwar, in addition to being a marvelous cook, is also a talented seamstress and both she and her daughter Arezo do magnificent needlework, which is sewn into dresses, blouses, belts, and pillows. She spoke no English when she arrived in this country, but she is learning the language and hoping to find work that makes use of her talents.

Awrang has recently been commissioned by the Museum of Islamic Art to create a modern calligraohic artwork for its collection.