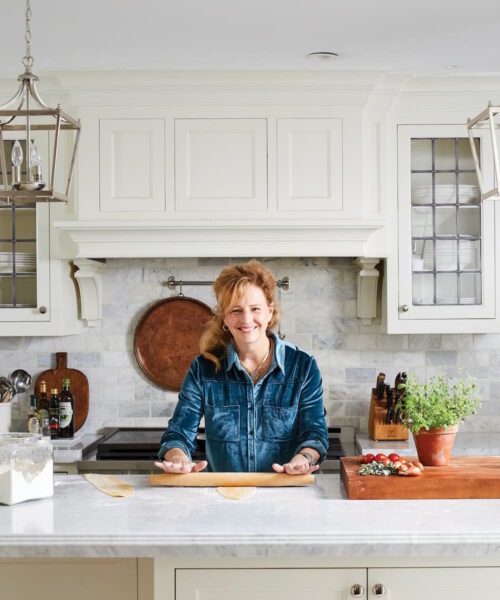 Christmas at the Castle in Cornwall

A Touch of Bavaria Nestled in Cornwall

One doesn’t get to visit a castle in Connecticut very often (maybe never) much less live in one. But that’s exactly what Susi Stone and Russell Barton do. A real life castle. It is located at the end of a narrow, mile-long driveway on a 275-acre property that is surrounded by rolling fields, dense woods, waterfalls, and ponds. It also includes a swimming pool, horse stables, and a helipad. Over the years it has often been referred to as Hidden Valley Estate.

The castle was designed by architect Edward C. Dean, in a style fashioned after the Hollywood design called Provincial Revivalism or Fairy Tale. Construction began in 1921 and was completed in 1924. It was built as a country retreat for New York socialite Charlotte Bronson Hunnewell Martin and her husband Dr. Walton Martin. Since Mrs. Martin’s death in 1961, the castle has had several owners and been through various renovations and much neglect. When Stone and Barton bought the property two years ago it seemed an insurmountable task to recreate its splendor. But that’s exactly what they have done.

“We lived in the pool house for the first six months,” explains Stone. “The castle had not been lived in for four years. There was no heat or hot water, ceilings were falling, doors wouldn’t close, none of the faucets worked, and everything was covered in black mold. We couldn’t live in it and no one would come to work until we got rid of it. But Russ saw beyond all that and we just dug in and made the necessary repairs. It was not easy.”

Barton is a developer and entrepreneur who is always on the lookout for interesting properties to buy, including the Litchfield Jail, which he repurposed. Since he and Stone met 12 years ago, he has completed countless projects and they have lived in six different houses. This time, Stone claims, she is not moving again.

“Russ buys buildings because he sees the potential value,” says Stone. “He doesn’t fall in love with ‘the wood,’ as I do. I am a nester and love to live in my house.”

In a normal time, Stone and Barton spend the winter in Florida, where Stone can ride her horses. Due to COVID, however, they spent last winter in the castle and celebrated their second Christmas there. Stone loves the holiday and begins planning the day after Thanksgiving.

“I grew up in Germany and there was a castle nearby, so this is a throwback to my childhood,” says Stone. “Christmas was very homespun. We looked forward to singing carols, opening our advent calendars, leaving our shoes on the doorstep to be filled by Saint Nicholas with nuts, candies, and gifts. We would get up at the crack of dawn.

“Christmas markets are big things in Germany and my mother bought tons of handmade ornaments, which I have inherited. The holidays are very family oriented, a lot of music and a lot of food. Last year both my children got married so we had new families join the celebration.”

Stone loves to cook and that is a big part of her holiday planning, assisted by Barton. She also teaches cooking classes and makes wedding cakes for the Mayflower. On her blog she offers recipes and reflections about living in the castle. This year Stone and Barton will celebrate the holidays in style at the castle and then head off to Florida, knowing that in the spring the castle awaits their arrival.