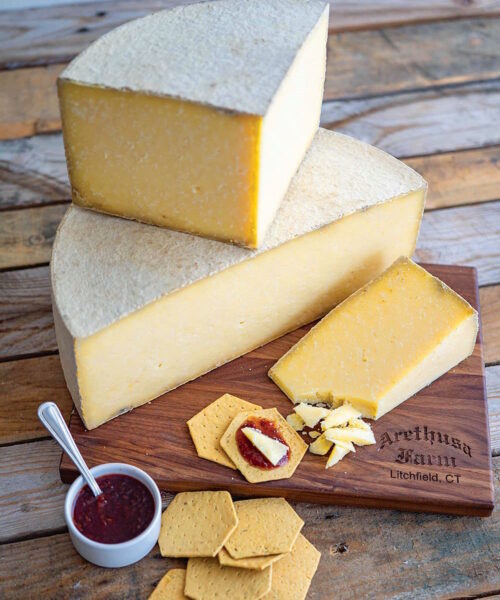 Americans love to put cheese on things. We put it on burgers, sandwiches, eggs, pizza, pasta, even vegetables. These days supermarket shelves groan under the combined weight of tons of American, Swiss, Monterey Jack, Cheddar, Brie, Mozzarella, and who knows how many dozen or so more types of cheese. But the cheese that most Americans consume is mass-produced dreck that would send the average Frenchman screaming for the hills.

Thankfully in recent years there has been a small but steady revolution in the cheesemaking business. Artisanal dairies from California to Maine are, literally, churning out exciting and delicious cheeses that nobody would confuse with Velveeta.

As many residents of the Northwest Corner know, Litchfield County is lucky to be home to one such artisanal cheesemaker. Arethusa Farm Dairy in Bantam began making cheese in 2011 and manager Chris Casiello has been there since the beginning. “Tony and George brought me in to oversee design and construction,” he said, referring to Arethusa’s owners Tony Yurgaitis and the late George Malkemus. “And I stayed. From nothing, we now make nine different award-winning cheeses.”

It has recently welcomed Wisconsin native Eric Schmid as its new cheesemaker. “I had never heard of Arethusa and knew nothing about Connecticut,” he says, “but now I’ve fallen in love.” Schmid adds, “You’ve got to love making cheese. It’s hot and wet and hard work.”

To appreciate just how hard, think about artisanal cheesemaking the way you might about the making of a fine wine. To begin with, cheesemakers and winemakers are essentially farmers, slaves to the elements and the vagaries of Mother Nature. Much as the winemaker must conjure grapes out of the soil, cheesemakers must source the right kind of milk. In both cases it is the terroir—the particular characteristics of an individual patch of land, the minerals it contains, how much sunshine it receives, etc ., etc.—that determines so much of the flavor.

But they must also be scientists too. They need to be able to perform the alchemical process that transforms grapes into wine and milk into cheese, not once but every time. As Casiello puts it, “Anyone can make cheese. But not everyone can make the same cheese consistently.”

And, finally, they must also be artists because it is the spark of creativity that can mean the difference between the good and the great.

Arethusa makes great cheese. We are talking a range of really superior fromage. From a classic English-style Arethusa Blue and the nutty and savory Tapping Reeve to the gooey ripe deliciousness of Karlie’s Gratitude, a farmhouse Camembert—to name just three—these are cheeses that will satisfy any connoisseur’s taste buds.

Today Arethusa’s cheeses are available from its own retail stores in Bantam, New Haven, and Hartford—where you can also buy its delicious ice cream and milk—as well as from its restaurants Arethusa al tavolo and Arethusa a mano, local markets and major grocery chains such as Big Y and Stop & Shop. “We love what we do,” says Casiello. “We’re just your local hometown dairy.” But one that is winning national attention.