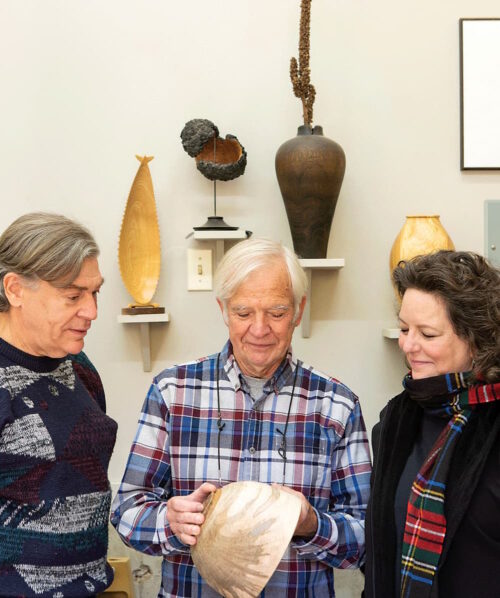 Tropical storm Isaias wreaked havoc in many parts of Litchfield County. Residents were without power for many days, falling branches and trees were strewn across countless streets. Linda and Clayton Blick of Litchfield were two of its victims. While their house remained safe, the 70-foot red maple on their property did not. It fell, bringing with it a monumental problem—how to get rid of the tree’s remains.

“The base of the tree was too big for my husband’s 14-inch chainsaw to handle,” says Linda. “Our wonderful young neighbor Adam, who just became a new dad, came to our rescue. When he sawed the last 20 feet at the base of the tree, the chunks of wood revealed these spectacular sunburst designs. As Adam, my husband, and I gazed at these designs we thought they were beautiful and wanted to preserve a piece as an art form.”

When Isaias arrived, Linda had not been in a good place. “I was feeling quite demoralized,” she explains. “I had been diagnosed with Lyme disease and was seriously ill in July. Plans to celebrate our 40th anniversary got cancelled because of Covid. Then the storm hit and we were without power for six days. Seeing the beauty that can come from nature lifted my spirits.”

The Blicks were quite taken with the sunburst patterns and decided there should be a way to create something out of one of the pieces. They researched and found woodturner extraordinaire Richard Heys. Heys has always been interested in woodturning. When he retired as an organic chemist in pharmaceutical research and development, he took it up more seriously. He recognized the same beauty the Blicks had seen. So they commissioned him to make a bowl to commemorate the event, the kindness of Adam, and their anniversary.

“The finished bowl will be about six inches high and seven inches wide,” says Heys. “I’ve turned it to the approximate shape I want. I’ve coated it with a wax emulsion to slow down the curing and the loss of water. I’ll keep it at this stage for about six months so that it seasons. Then I will put it back on the lathe and complete the final form, wall thickness, and the details for the design. At that point the wood should be stable. It will be round and stay round forever. I will put a transparent finish on it. My goal is to make objects that allow the wood to speak to its history and at the same time be beautiful, interesting, or intriguing.”

Heys has invited the Blicks to be part of the journey through photographs of the progress as well as visits to his workshop.“What is materializing is stunning,” says Linda. “We love what he is doing and while it will be functional, the bowl will be a cherished treasure that we will keep as a piece of art. In addition to that, we’ve become closer to our neighbor and have met the amazing Mr. Heys.”