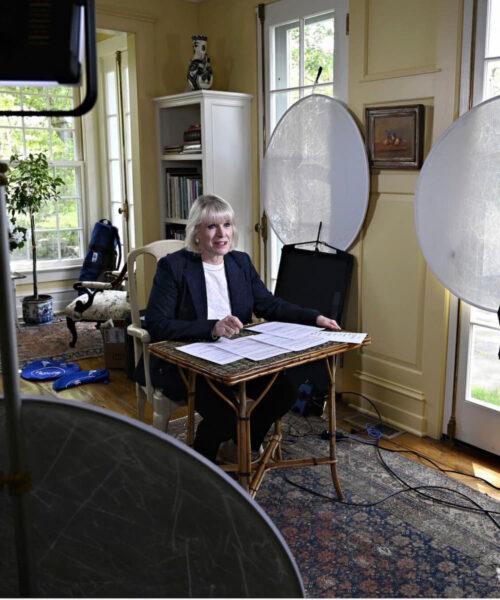 Jane Whitney and Lindsey Gruson Bring Our Country to the Hills

Jane Whitney had to prove herself as a moderator when Conversations on the Green was launched some 10 years ago. Why would a talented 25-year veteran of television (hosting several shows) and print media be in such a situation?

“A group of people in Washington (where she and her husband, New York Times reporter Lindsey Gruson, have lived since 2005) talked to Lindsey about presenting a lecture series,” says Whitney. “They also wanted Lindsey to moderate the panel discussion. He said he would do it but his wife was going to be the moderator. Well, I guess they weren’t aware of my background. They agreed but I had to try it out first.” Needless to say, Whitney passed the “audition” with flying colors.

Conversations On the Green’s stated mission is “to educate and invigorate the community through discussion of the country’s issues and ideas.” The Town Hall style forums allow both the speakers and the audience to share experiences, perspectives, and insights.

The Parish Hall of St. John’s Episcopal Church in Washington, Town Hall, the Washington Montessori School and Shepaug Valley School auditorium have served as venues. The show went virtual last year at the start of the pandemic, broadcasted from Whitney’s and Gruson’s home.

A 90-minute livestream is distributed globally and is then edited for length into an hour show that CPTV broadcasts several times. Last year, CPTV  started distributing the show nationally through Wavelength. Any PBS station can get the service and check out a program and broadcast it.

American Public Television (APT), the premier syndicator of PBS shows, will start distributing COG to all public television stations in the country this year. The show is posted to its website and most major social media platforms, including YouTube, and as a podcast on most major platforms.

“The amazing thing is that we have a high-quality, important, nationally broadcast emanating from a small town in Litchfield County,” says Whitney. “I can’t think of any other such show that had its genesis as a community fundraising event. We really don’t have much of a staff, one and a half paid workers, and great volunteers.”

“I always feel COG is the community’s show, never mine or Jane’s. The show itself is put together by a whole group of volunteers with the help of countless community members who donate time, experience, money and curiosity,” says Gruson.

Gruson produces the show and edits the livestream with CPTV, while Whitney moderates and writes all her copy. Guests appear without fee, which is a credit to the couple’s reputations in the industry, connections, and the fact that guests view the show as an important undertaking.

Whitney was a correspondent for NBC News based in Central America and a reporter for Entertainment Tonight.” She also anchored broadcasts for PBS, CNN and CNBC, and a Warner Brothers nationally syndicated TV program, “The Jane Whitney Show.”

“We have always been in a place where we were against the odds with this. As a 501(c) non-profit we apply for grants to help offset costs. My husband has really been a driving force through the years.

“I don’t have anything to prove professionally. We are doing this because the country and our culture are in a place where they need factual and reliable information from all sides and rational discussion,” says Whitney.