The Moderately Lazy Biker’s Guide to Litchfield County (and just beyond) is an engaging summer read even if you aren’t interested in bicycle trails.

One of the most popular books in the Northwest Corner isn’t exactly a book. Nor is it written by a local author. But it’s a look at Litchfield County that people on two wheels are clamoring for. And it took a visitor from Cincinnati to give it to them.

Author Rick Sowash, a writer, publisher, filmmaker, and composer of classical music, spends part of every summer visiting the Litchfield Hills, riding his bicycle here almost daily. He has compiled some of the area’s best bicycling routes into The Moderately Lazy Biker’s Guide to Litchfield County (and just beyond). More a booklet than a book, Sowash’s guide is both detailed and charming to read. Maybe it’s his love for the area. “We get up to Litchfield County at least twice a year, staying for two to six weeks at a time,” Sowash says. The rest of the time we live in Cincinnati, but our hearts are always yearning for Connecticut.”

Rick and his wife stay in Litchfield County to house-sit for friends who have a place in West Cornwall. During one of those visits, in 2007, Rick got the idea for a guide of his own when, at the Housatonic Outfitters in Cornwall Bridge he asked proprietor Harold McMillan if he stocked a book about bike routes in Litchfield County. “He had one with routes of the whole state, but none exclusively devoted to the loveliest county,” Rick told us. Harold countered with, “Man, if there were a book like that, I could sell a ton of them.” And that was about all Rick needed to jump-start the self-published project, spending the winter poring over maps of Litchfield County, “a-quiver with anticipation, working out rides that would be moderately easy,” he said. “I’m not the Tour de France type!” The following summer, Rick did those rides and brought out the book in spring 2009.

When describing the trails, Rick waxes both poetic and fact-filled. They’re crammed with personal observations so alluring they might make even nonbikers long to run to their nearest bike shop. According to Rick, “I was in The Smithy in New Preston and happened to meet the owner, Howard Rosenfeld. He said, ‘You wrote that book?  You’re my HERO!’ and added that the book had prompted him to get out his old bike and go tooling around the countryside, something he had not done in years.”

Hand-drawn maps of each route are also included, along with lovely quotations by Odell Shepard (1884–1967), the 1937 Pulitzer Prize winner, novelist, journalist, professor, politician, poet, and author of many books on Connecticut history. “I’m an admirer of Shepard,” Rick says. “I’ve even published one of his books, a lost manuscript which I discovered, edited, and brought to light, called The Cabin Down the Glen. I knew many of his wonderful, short quotations about his beloved state. I worked these into the biking book along with illustrations by Connecticut artist Beatrice Stevens, originally drawn for Shepard’s classic The Harvest of a Quiet Eye.” Sprinkled throughout the pages are black-and-white etchings by Stevens (1876-1947) that capture the area’s natural beauty. In addition to the maps, drawings, and descriptions of each trail, Rick includes mileage, pavement conditions, shoulder widths, and points of interest.

Norfolk to West Cornwall: “One of the best bike rides in Connecticut… I saw a bobcat on this stretch one time, so keep your eyes peeled for wildlife and for sculpture (!) on display in the fields as well as a delightful little chapel or playhouse on your left.”

Cornwall to Litchfield: “How difficult? moderate; only one uphill climb; it’s very long but then comes heaven!”

Sharon Audubon Center to Cornwall Bridge: “…the point of this bike ride is what may be the longest downhill coast in Connecticut. Glorious! You go all the way from the top of Sharon Mountain down Rt. 4 into Cornwall Bridge with nary a turn of the pedal! This comes as close to flying as earthbound mortals can ever hope to get.”

The Great Lakeville Figure-8: “…Now you confront the mountain range you were admiring earlier, so lovely from a distance, so steep up close. It’s a long haul up and I have to confess that I walked my bike for half a mile or so.”

Sharon – Salisbury Loop: “…There are stone walls to be admired and one of the area’s prettiest red barns on the right just before you reach Lime Rock. Notice, too, the strange Victorian pagoda atop a terraced slope on your left at White Hollow Vineyards.”

Washington Depot Loop: “…Hills and more hills! But be of good cheer: what goes up must come down.”

Norfolk Loop: “…Several times I caught the fragrance of pines. And the brooks in this region are rendered dark as tea by the tannin in the pine needles as rainwater soaks through the forest floor.”

The booklet is doing so well it’s now in its second printing. But Rick remains happily pragmatic. “It will never be a New York Times best-seller,” he says, “but it has ‘legs’, as booksellers say, because it features three things that we’ll always have with us:  bicycling, Litchfield County, and laziness. Ha!””

Asked if he had any plans for future guides about Connecticut, Rick didn’t hesitate. “I would like to bring out The Moderately Lazy Hiker’s Guide to Litchfield County,” he said. “However, being moderately lazy, I haven’t gotten around to it yet. Also, I’d need a co-author since my knees aren’t so great any more, someone who could actually do the hikes.” 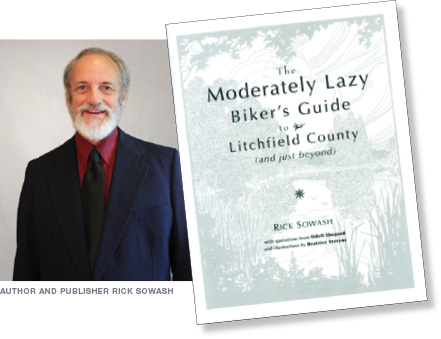 Rick can be reached at:
rick@sowash.com
or at his web site:
www.sowash.com.
The Moderately Lazy Biker’s Guide
to Litchfield County (and just beyond)
can be found at the following places: