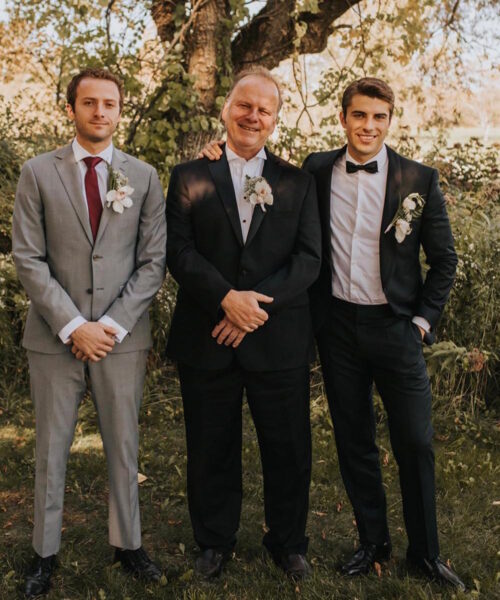 It is not uncommon for a son to have a career in the same business as his father. But it’s unique for two sons to follow a parent’s line of work and be successful at it. Such is the case with actor Robert Clohessy and his sons Byron and Myles. All three are thriving in the world of entertainment. Clohessy, a West Cornwall resident, is a seasoned actor who has done his share of acting on stage, in the movies, and on television, most recently as Lieutenant Sid Gormley in “Blue Bloods,” now entering its 11th season. In a sea of cop shows it is among the most popular.

“I keep thinking they are going to kill me off,” Clohessy jokes. “But I make them all laugh on the set so they decided to keep me. Tom Selleck does a great job of focusing the whole show. In addition to the drama and conflict, the family seated around the dinner table in the closing scene, resonates with so many viewers.”

Neither son grew up aspiring to be an actor. Both were involved in sports at a high level, with Myles winning a soccer scholarship and playing for the Olympic Development Team. Byron, the older of the two, went to school for music, but when he started doing plays in college, the acting bug took hold of him as well.

Myles attended the Conservatory of Acting at SUNY Purchase, where, coincidentally, Clohessy himself went to school. Ironically his first acting role was in an episode of “Blue Bloods.”

Clohessy never encouraged either son to follow him into acting, although he did drag them to the theater whenever he was performing.

“As a lifestyle acting is difficult,” says Myles. “But my dad never discouraged us and has always been supportive in every aspect of our lives.”

Both sons grew up watching their father act and heard his complaints as well as his love of acting and took it all in stride.

Both boys recognize the work ethic followed by their father.

“Thanks to my dad we have a really positive attitude about acting. He is very relaxed but has worked so hard and I know how important the work ethic is,” says Myles. “I try not to get discouraged. You can go on countless auditions and then land the one role that changes everything. Acting is playing pretend and it should be fun for you.”

The three men have acted together in several episodes of “Blue Bloods.” Additionally, Clohessy has made five films with son Byron and four with son Myles. Most recently they completed two movies for Amazon Prime: Honor Amongst Men and Equal Standard.

Meanwhile Myles is acting in the YouTube series “Liza on Demand” and will then go on to Fire Island to act in a film appropriately called Fire Island. Byron continues to follow his two passions: music and acting. Clohessy senior has written his first play Welcome Home, Johnny, which was set to debut in 2020 at the Charles R. Wood Theater In Glens Falls, NY. Sadly due to the pandemic the opening has been postponed to later this year.