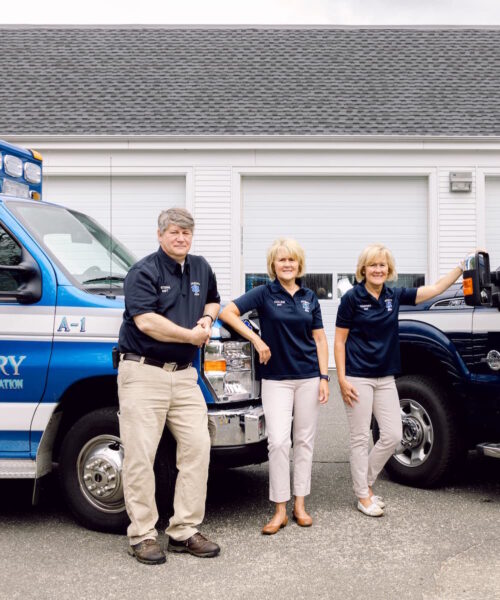 We’re all in this together

Don’t be surprised if you go to pay your taxes at Roxbury Town Hall, and the tax collector suddenly takes off. Or, if you’re a student at an area public or private school, and one of your teachers gets a call and has to run. Or, if you’re attending a church service, and the minister must exit the altar, disrobe, and drive away.

Such is life in Litchfield County, where hundreds of heroes have full-time jobs, yet volunteer around the clock to rescue their neighbors from accidents, illnesses, overdoses, fires, fights, and falls. The local grocery store clerk might be the EMT who shows up when you’re having chest pains; your banker, plumber, or landscaper might be the firefighter who douses your house fire.

“Often we’ll get a call, and I don’t recognize the address, but I get in the house and there are all these familiar faces,” says Morgen Fisher, a volunteer EMT with the Washington Ambulance Association and a science teacher at the Frederick Gunn School. “A lot of people don’t realize that EMTs around here are regular folks with jobs in the community, who also happen to sleep with their radios on and their uniforms next to their beds so they can jump to a call at 2:30 am.”

Since the Covid pandemic hit last year, ambulance and fire associations around the county’s 26 towns report record high numbers of calls. In Washington, emergencies have doubled over the past decade, with 2020 setting a record of 408 calls. “And that’s not even counting 2021, which has been insane,” says Heidi Johnson, a professional photographer, who is an EMT in Washington and Warren, and is a part-time staff member of New Milford Community Ambulance.

The call spike has largely been caused by the huge influx of New Yorkers since Covid hit, says Jacquie Rice, chief of the Salisbury Volunteer Ambulance Service. “We had over 500 EMS calls in the 2020 calendar year, and we’re normally about half that.”

Salisbury and Washington are two of the few remaining towns in Connecticut to offer free ambulance services, 100 percent funded by the community. Most Litchfield County towns have volunteer EMTs and firefighters, but the departments are partly funded by state and local taxes, and patients are charged for services. “We’re not even a line item on the town’s budget, that’s how free we are,” says Rice, adding that Salisbury’s ambulance department is celebrating its 50th anniversary this summer. “We get calls from patients afterwards, saying, ‘Where’s my bill?’ I say, ‘It’s free. You’re not going to get a bill from us.’”

While some emergencies have involved people with Covid symptoms, many have been due to the quarantine’s myriad side effects, including anxiety, alcoholic issues, drug overdoses, and suicide. “We had a 10-year-old boy who was having a breakdown. The whole disruption of his routine was really rough,’ says Kim Pokrywka, Roxbury’s tax collector, who’s been a volunteer EMT for 13 years. “We had a young girl who was addicted to heroin. We took her to the hospital three times. She would talk to us and say how much she wanted to quit, but couldn’t. She was really upset about Covid. The third time, she died.”

Pokrywka and her twin sister, Kaye Collins, also a Roxbury EMT, are among many responders who have been trained to administer Covid vaccines. The twins also went on a mask-making binge when the pandemic peaked. They sewed over 300 masks and delivered them door-to-door in the Roxbury emergency truck that was donated by actor Denis Leary (of “Rescue Me” fame) and his wife, Ann, who was a volunteer EMT when the couple lived in Roxbury.

The tax collector says it’s no problem to bail at work. Her boss, First Selectman Barbara Henry, who has also been trained as an EMT, “is fine with it,” Pokrywka says. “We’re in a small town, and we’re all in this together.”

For clergy like Linda Williams, pastor at Salem Covenant Church in Washington, and David Peters, minister at Roxbury Congregational Church, being a first responder often means swapping roles from medically treating patients, to emotionally and spiritually helping heal families, friends, and other paramedics from traumatizing calls. Williams mentions a recent three-car crash in Bantam that left two injured and one dead. “It was a horrific ordeal, with a very bad outcome,” she says, adding that she planned on proving a “critical incident debriefing” for her fellow volunteers.

“In a sense, the church loans me out to the community,” says Peters, who’s been a Roxbury EMT for 33 years. “The minister lives in the fish bowl. We’ve got quite a few parishioners who are also EMTs, so when we get a call, we might have to get up and go.”

Being an EMT, with the hundreds of hours of training and 24/7 calls, can be trying for families. “I’ll be out working with my wife in the garden on a Saturday afternoon, and a call comes in,” says Jim McDonough, a special education teacher at Shepaug Valley High School. “She’ll be like, ‘Fine, ok, see you whenever.’ But really, she’s great with it. She’s on board with the town’s motto: ‘We’re in it for the outcome, not the income.’”