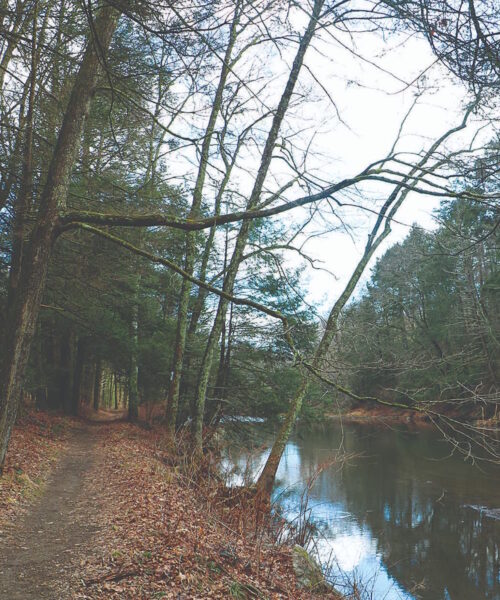 The Jewel in the Crown

Carol Bergren Santoleri literally walked upon the subject of her latest book The History of Steep Rock Association: The Jewel in the Crown.

The author and landscape historian chronicles the evolution of Steep Rock’s preserves from the original purchase by famed architect Ehrick Rossiter in the late 1800s through today.

Santoleri, a New Preston resident and landscape historian and photographer, has a personal involvement with Steep Rock’s land that goes back some 20 years when she began walking its trails. Her 240-page book beautifully depicts through words and images the town of Washington’s Steep Rock, Hidden Valley, and Macricostas preserves.

“I started to work on the book in my spare time,” says Santoleri, “expecting to spend a year writing a slender 40-page pamphlet similar to SRA’s two prior histories.” Little did she know that she would end up spending five years creating the elegant 240-page hardcover book with more than 150 illustrations, half of them her own photographs.

Founded in 1925, Steep Rock Association’s mission is to conserve ecologically and historically significant landscapes in and around Washington and the Shepaug River Valley, and to enhance the community’s connection with nature. It protects over 5,200 acres of land.

Brian Hagenbuch, Executive Director of SRA, says, “Santoleri’s book carefully traces the stories behind the preserves, as well as the conservation initiatives undertaken to protect their ecological significance. It should be a welcome addition to the lexicon of natural history books on the Litchfield Hills.”

In 1886, Rossiter, a famed architect who designed many homes and buildings in Washington, began acquiring land on the hillsides of Steep Rock Summit and the “Clam Shell,” buying up hemlock groves to save them from loggers. He opened the land, known as Steep Rock Park, to the community for carriage driving, horseback riding, hiking, and picnicking.

After studying early photographs taken by Joseph West (1876-1952), now in the collection of the Gunn Historical Museum, Santoleri found some of the image descriptions “vague.” She sought the exact spots on which West placed his tripod. “My goal was to replicate his photos in order to create `then and now’ photographs.” She discovered today’s trails are lined with many of the same trees, boulders, seasonal riverine islands, and barriers that mark the locations of bygone bridges and fords. “The view from Steep Rock Summit still reveals open space. Rossiter would surely be pleased to know that his efforts to protect the valley’s picturesque natural resources have been successful.”

A number of Steep Rock Association officials and members assisted Santoleri with her work. In addition to those of her own and West, she incorporated images from a number of other photographers.

“I couldn’t have completed this book without the support of my husband, John Santoleri, who hiked the trails with me, my daughter, Anna Santoleri, who edited my drafts, transcribed interviews, and woke at the crack of dawn to accompany me on photo shoots, and my father, Robert Bergren, who lent his editorial skills and photographer’s eye.”