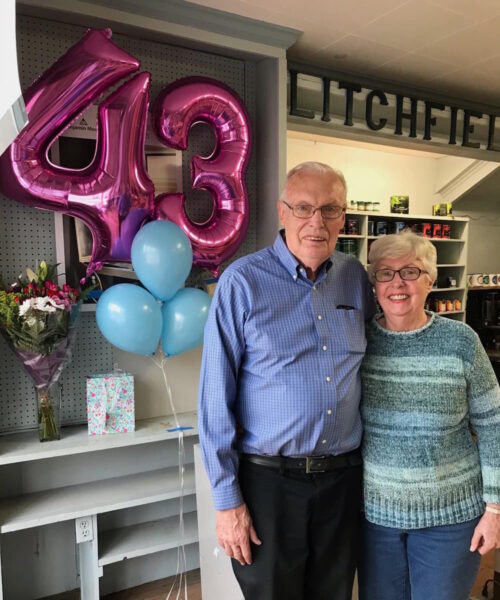 In August of 1978, John and Ann Winter, along with their four children, moved from New York City to Litchfield where they opened up a paint and wallpaper business with John’s brother. With the need for a new paint store in Litchfield, the Winter’s business was off to a successful start. Being the person who interacted most with customers, John fondly recalls his experience working with the people of Litchfield: “The business was supported by it’s great customers, and we became friends in many cases.” While John worked with the customers, Ann operated the office. “As far as I’m concerned, she did the harder work.”

In 1990, facing an expiring lease and the nearby George J. Switzer’s Lumber Yard going out of business, the opportunity to relocate to this more visible location was an obvious choice for the Winters. They moved their business from Sports Village to the old lumber yard, right off the road and easily accessible. The Winters business has remained and flourished there for the past 31 years. When asked what it was like working with his spouse for all those years, John says with a laugh, “Considering what I hear, it went very well!”

Years ago the couple decided they were ready to move on from the day to day of running the business, and after searching for the right new owner, the Winters recently sold Litchfield Paint and Wallpaper to Bessy’s Paint Company, previously located in Torrington.

With all of the changes going on, John will remain working in the shop for three months to get everyone acclimated to the new owners and company. One of these changes includes the new business name, The Litchfield Paint Company.

John believes the business will remain successful despite thew new changes, and pointed out 2020 has been one of its strongest years yet. “It’s a great opportunity for the new store, being that more people have time now (at home) to update and do things with their homes.”

Most popular paint color? “For a while it was a color I made up. The owner of the Oliphant shop and I made up the color for her store, it was called Oliphant Grey. We did that three years ago and it’s been the most popular grey,” John says.

The second most popular color is another self made classic, Litchfield Green, which the owners of the new store will have the formula to create.

As for retirement, John intends to stay on, working at the store a couple days a week to keep himself happily occupied and to help the new owners. “Retirement isn’t really in my vocabulary, I don’t have hobbies like golf, and I’ve been in the store for 43 years,” John says.

With new owners and updates but the same friendly atmosphere, the Litchfield Paint Company is open this summer and ready for business.