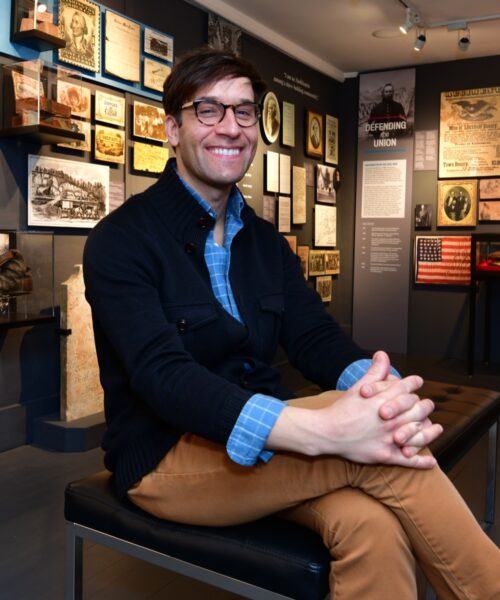 Throwback—Way, Way Back at the Gunn Historical Museum

The Gunn Historical Museum in Washington shatters that stereotype. Yes, it is located in a 1781 clapboard house and does have the aforementioned vitrines and spinning wheel, but there is nothing dusty about it. The recipient of a $100,000 grant from the Connecticut Department of Economic Community Development, the Gunn has put together Washington, Connecticut—An American Story, a beautiful and rich award-winning multimedia exhibit that traces the history of the town back thousands of years through to the present day.

Entering into the front room of the museum the visitor is greeted by bold colorful graphics that sketch out the town’s timeline, beginning with a painting of the Neolithic Native Americans who first settled in the area around 10,000 BCE (the museum worked closely with the nearby Institute for American Indian Studies). These graphics, designed by Sandy Hook based SandorMax, continue throughout the exhibit and are punctuated with interactive videos and audio guides, breaking the town’s history down into multiple chapters, including its Colonial period, industrial and commercial efforts, its pioneering abolitionism, its involvement in America’s major wars, the long association with education and the arts, and its role as a summer resort for both the wealthy and the working class.

What makes the exhibit particularly special are the artifacts gleaned not only from its impressive collection of more than 15,000 items but also from the pieces that have been donated by Washington’s current citizens, many of whom are descendants of its first settlers.

“The town has been incredible,” says Stephen Bartkus, the museum’s curator. “They’ve allowed us to borrow their family treasures. They volunteered to help us put the show together and many of them serve as docents. It’s an incredibly passionate and enthusiastic town full of people who take enormous pride in their history.” 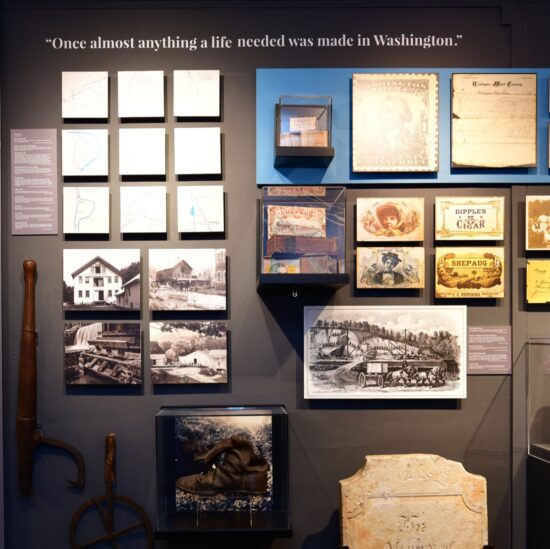 Among the treasures, to name only a few, are a pair of epaulets that belonged to the Marquis de Lafayette, needlework samplers dating back to 1791, a 1920 hand-decorated guest book from The Mayflower Inn (the year it opened), a Revolution-era long rifle, and an empty 19th-century Litchfield Belle cigar box. Cigar-making was only one of many industries that flowered in Washington over the past two hundred years. In addition to being a source of marble—hence the eponymous village of Marbledale—there were also numerous mills, ironworks, dairies, and inns. The town even made a go at manufacturing matches.

While local manufacturing has gone the way of the Shepaug railway that once ran through the region, what has been consistent over the past century is the appeal of Washington’s natural beauty. Beginning in the late 19th century weekenders, summer people and locals mingled on the shores of Lake Waramaug, the second-largest natural lake in the state. At one point in the 20th century, according to a map in the museum, 17 inns were lining the lake, including the Lake Waramaug Casino where, docent Doug McHan says, “The weekends back then in the ’40s and ’50s were wild. People would drive from all over to drink and dance there. It wasn’t a real casino, of course. They just called it that to sound fancy.”

For the curious visitors or local enthusiasts, a few hours exploring this fascinating microcosm of the American experience will be time well spent. It will be only a happy memory. Only patience is needed for now, until they can re-open and share the treasure inside.