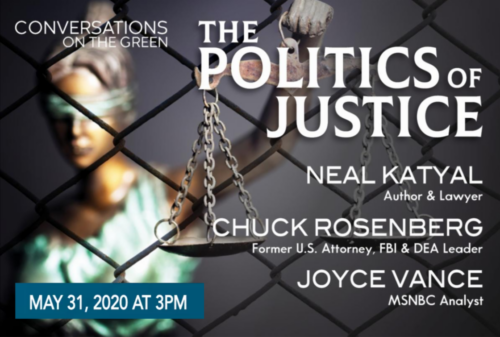 The Politics of Justice

Unchallenged for so long, the sanctity and legitimacy of the American system of checks and balances has been tantamount to political bedrock, seemingly certain to survive even a cataclysmic attack.

But the daily headlines show that the rule of law, American democracy’s principle guardrail, is being battered as never before and, many analysts warn, now is crumbling, threatening to derail the entire American experiment in constitutional government.

In a May 31 forum, the second of the 2020 season, Conversations On the Green brings together a panel of renowned legal scholars to discuss the threats to the rule of law, which contains the furious competition among the Federal government’s three branches.

A benefit for charities on the front lines of the battle against the pandemic, the panel is led by Joyce Vance, one of the first five U.S. Attorneys – and the first female U.S. Attorney – nominated by President Barack Obama. Confirmed unanimously, she served for eight years until 2017 in the Northern District of Alabama and earned plaudits for her battles against public corruption and on behalf of civil rights. She joined the University Of Alabama’s Law School as a distinguished visiting lecturer the same year and in 2018 became a contributor to MSNBC, where she regularly provides commentary.

Former Principal Deputy Solicitor General Neal Katyal, a national security law professor at Georgetown University Law Center, will join Vance on the panel. American Lawyer Magazine’s Litigator Of The Year in both 2016 and 2017, he is the son of Hindu parents from India and has argued more cases before the Supreme Court than any other minority lawyer. While serving as Deputy Solicitor General, he successfully argued the defense of the 1965 Civil Rights Act and, in 1999 drafted the special regulations that guided the Mueller investigation of the Russian government’s efforts to interfere in the 2016 presidential election.

Rounding out the panel is the former acting director of the D.E.A., Charles “Chuck” Rosenberg. He was the lead attorney in headline grabbing Federal prosecutions involving espionage, kidnapping, murder and complex financial crimes. The breadth of his experience is reflected in the long list of Department of Justice senior positions he has held, including posts in the Tax Division’s Criminal Enforcement Section, Assistant U.S. Attorney in the Eastern District of Virginia, Counsel and Chief of Staff to the Director of the FBI, Counselor to the Attorney General and Chief of Staff to the Deputy Attorney General. A former partner at the private law firm Hogan Lovells, he was nominated by President George Bush and unanimously confirmed by the Senate in 2006 to serve as the U.S. Attorney for Eastern District of Virginia.

Moderated by former NBC correspondent and national talk show host Jane Whitney, this interactive symposium, which begins at 3 p.m. on May 31st and runs 90 minutes, will be live streamed, allowing anyone with an internet-connected device to participate and ask questions.

Tickets are $25 and require advance registration at conversationsonthegreen.com, where participants can leave a question for the panelists. On the day of the event, registrants will be sent a link to the live stream and a private password to the channel.

All net proceeds of the event support charities leading the fight against the pandemic, including the American Nurses Foundation Coronavirus Response Fund, which provides immediate assistance to those risking their lives during this crisis; Greenwoods Counseling Referrals Inc., which provides access to compassionate and high quality mental health care; Susan B. Anthony Project, which promotes safety, healing and growth for all survivors of domestic and sexual abuse; and New Milford Hospital, a provider of cutting edge medical care to the northwest Connecticut community.