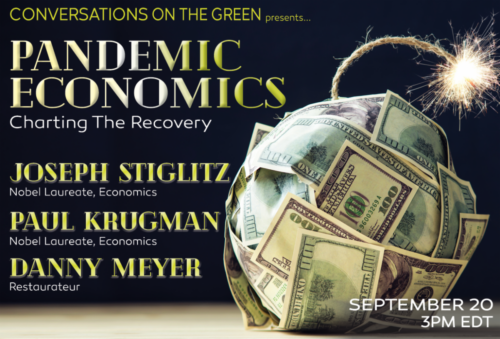 Two Nobel laureates in economics walk into a bar in the middle of a pandemic and meet one of the country’s most respected and admired businessmen.

“America drank away its children’s future,” one of the laureates, Paul Krugman, laments in kicking off the conversation with the headline of his recent column in The New York Times.

The second laureate, Joseph Stiglitz, and the businessman, Danny Meyer, a restaurateur whose consumer savvy bequeathed him a Midas touch, will respond personally on September 20 when the three titans of American economic thought come together in Conversations On the Green’s sixth virtual forum of the season.

The first time the dismal science’s three giants have ever debated, they will discuss how to repair the economy amidst the worst economic crisis in almost a century and the once in a generation shift now underway in economic thinking. As part of the symposium, they also will examine how to exploit the ongoing calamity and contain the jaw-dropping risks in an effort to launch an era of prosperity like those that followed the Great Depression and World War II.

$25 – Registration Fee
On the day of the event, we’ll send you a link and a unique password to a private Vimeo channel that allows us to live stream our programs safely.
Questions for our panelists may be submitted in advance during registration or via the chat box during the live stream
** Season Pass Holders DO NOT Need to Register **
REGISTER HERE