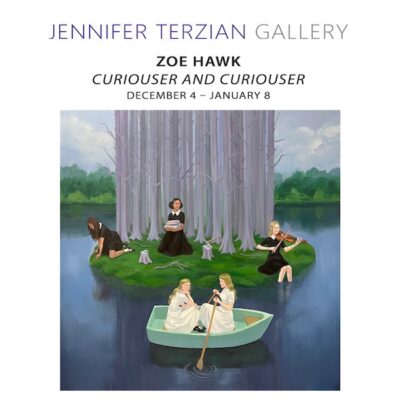 Jennifer Terzian Gallery is pleased to announce Curiouser and Curiouser, a solo exhibition of new work by Missouri based artist Zoe Hawk.

Hawk’s work deals with the complex experience of girlhood, exploring adolescent anxiety, feminine identity, and belonging. These themes are tackled within scenes of play, group interactions, and discovery, often stylistically referencing children’s storybook illustrations.
In her new body of work, Hawk draws influence from traditional folk murder ballads of the British Isles and Appalachia; the Radium Girls (women factory workers in the early 20th century who literally glowed, to their eventual detriment); and the Florida mermaid shows of the 1960s. Also included in the exhibition are paintings from Hawk’s Tarot series. In creating this series, Hawk researched traditional tarot symbolism and meaning and translated it through the lens of her own work. Hawk’s main point of reference for the project was the Rider-Waite set, the most iconic and quintessential deck, which dates from 1910. Most of the designs in her series played on the Rider-Waite poses and symbolism, such as the Hermit carrying a lantern, or the Hierophant’s raised hand gesture. However, all of Hawk’s cards reflect upon the experience of girlhood—sometimes depicting its traditional cultural signifiers (the Page of Wands as a bridesmaid, Temperance at a tea party) while others are more contemporary representations.

The narratives depicted in the paintings are meant to be sweet and somewhat familiar to the viewer, yet upon closer inspection they take a mysterious or unsettling turn. Sometimes conveying innocence and curiosity, other times confronting violence and fear, Hawk’s work investigates both the wonder and distress involved in coming of age. Uniforms, colorful outfits, and simple shift dresses signify various modes of feminine identity, while backdrops of institutional settings and wild landscapes set the stage for the girls’ interactions. The characters inhabit their own little worlds and act out their own dramas; adult authority and guidance is for the most part only implied, exercising influence from the periphery. Somewhere between childhood and adulthood—between fairytales and the dark realities of womanhood—the girls engage in an intricate play of yearning, contention, camaraderie, and mischief, as they navigate their social and physical environments.

Zoe holds a BFA in studio art from Missouri State University, and MFA in painting from the University of Iowa. Her work has been exhibited both nationally and internationally, and included in publications such as New American Paintings, Plastik Magazine, ArtMaze Mag (UK), and JOIA Magazine (Chile). She has attended artist residencies in Ireland, Norway, Belgium, and Qatar, and the Women’s Studio Workshop in Rosendale, NY. Exhibitions include From Pangs to Pangolins, curated by Trenton Doyle Hancock (Shulamazit Nazarian, Los Angeles), The Four Stages of (Art) Love by The Street and the Shop (FRIEZE LA), SPRING/BREAK Art Show 2019 by the Desert Center (Los Angeles), Contemporary Art Qatar (Kraftwerk, Berlin), and solo exhibition Dreaming as the Summers Die (Glass Rice, San Francisco). Special collaborative projects have included pieces for ZARA’s Women in Art clothing collection, released worldwide in 2019, and the Day Dreamers Tarot deck, created for international documentary film festival TRUE/FALSE in 2020. Zoe is currently based in Columbia, Missouri.