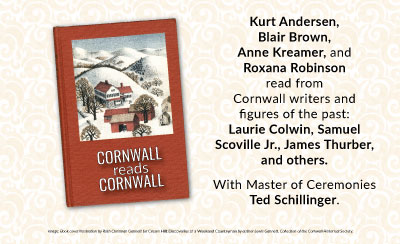 This is a very special event. It is the second annual Cornwall Reads Cornwall. Last year the audience loved the production and filled the UCC Church to capacity. It is an amazing opportunity to hear the words of great Cornwall writers and figures of the past, given voice by Cornwall neighbors. This year the format is the same but designed to bring laughter and light to your Thanksgiving weekend, as follows:
Kurt Andersen, critically acclaimed novelist, critic, and commentator, who previously co-founded Spy magazine and hosted public radio’s Studio 360, will read from the inimitable James Thurber, New Yorker writer, cartoonist, Standard poodle breeder and long-time Cornwall resident, whose hilarious stories, essays and drawings delighted America for decades.

Blair Brown, award-winning star of stage and screen, erstwhile Cornwall resident and now neighbor, will read from the exquisite prose of the novelist and food writer Laurie Colwin, a Cornwall summer resident.

Anne Kreamer, author, popular columnist, and gardener, will read from the work of Samuel Scoville, Jr., a lawyer, adventure- and nature-writer, whose family came to Litchfield County in the 1700s.

Ted Schillinger, distinguished producer, writer, director of films on Netflix, CNN, A&E, and elsewhere, will preside as Master of Ceremonies.

Advance registration is required for this on-line Zoom program via the link on our website: CornwallLibrary.org.

All are welcome. Donations to support our on-line programming are encouraged.